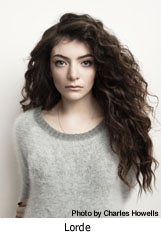 Pop star Lorde will headline the 2014 Preakness InfieldFest concert at Pimlico on May 17.  The “Royals” singer took home two Grammys this year for Song of the Year and Best Pop Solo Performance.

“Lordes’s appeal cuts across multiple fan demographics and reflects the cutting-edge talent fans have come to expect at InfieldFest,” said Maryland Jockey Club president Tom Chuckas. “She is an extraordinarily talented artist, and we look forward to welcoming her to Preakness InfieldFest.”

This will be the sixth season of the concert for the Baltimore race known as “The People’s Party.” A second stage will feature other performers, which will be announced as the race nears.  Tickets can be purchased here.

Preakness is the the middle jewel in horse racing’s famed Triple Crown.