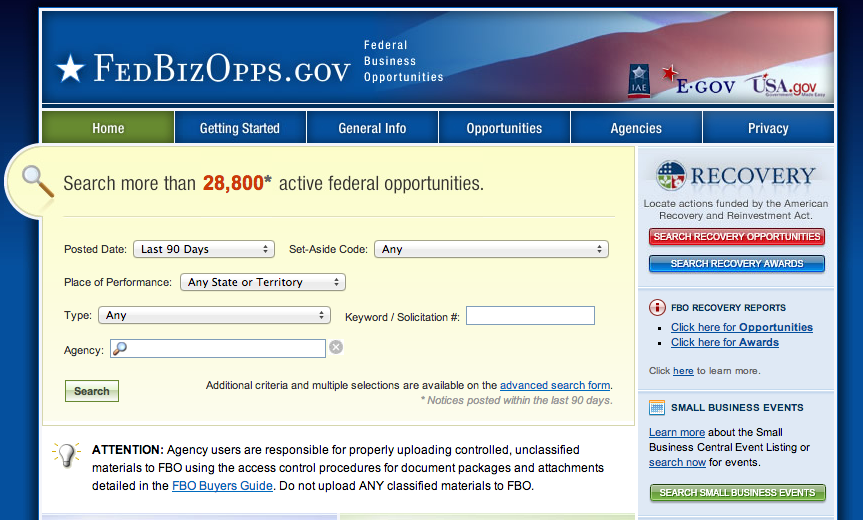 On Aug. 1, FBO.gov was modified so the Interested Parties section is accessible only by logging onto the site. Interested parties refer to those companies or organizations interested in bidding on a government contract.

Creating a login on FBO.gov is free; however, putting data behind a login wall means that data no longer can be indexed. Google and other search engines take data, index it and make it searchable. When information is behind a login wall, searchability is removed from the equation.

The ability for data to be indexed is outlined in the open data executive order released in May. The order outlines seven factors required of government data, with accessibility being one of them: “Open data are made available in convenient, modifiable and open formats that can be retrieved, downloaded, indexed and searched,” the framework states.

The General Services Administration said the change was made because of security concerns.

“FBO was being crawled by a botnet, affecting FBO performance for the general public, slowing down regular searching and use of the application,” said Cara Battaglini, spokeswoman for GSA’s Federal Acquisition Service. “It is our goal to optimize the availability of Interested Party List information by providing a site which is responsive and functional for all users.”

Hudson Hollister, founder of the Data Transparency Coalition, said that explanation doesn’t add up and why that particular piece of information would be put behind a login wall.

Since the executive order, the government has made available massive amounts of data to the public. However, the one area lacking transparency is spending data, including agency financial statements, budget actions, grants and contracts, Hollister said.

“If spending data isn’t open, then the most important area of government information is missing and government isn’t truly open,” Hollister said. “The removal of this data field reflects a significant step backward in openness of contracting data.”

When asked if the change to the site goes against the White House’s open data policy, Battaglini responded the data is available to the public.

“Though it requires a user name and password, any citizen can establish a user account on FBO.gov for free,” she said. “As such, it is consistent with the guidance on openness of the data…”

“This setback for data transparency is making it harder to use FBO data for public accountability, competitive intelligence, acquisition management, research and analytics,” Hollister said.

The executive order has spurred a new wave of companies and entrepreneurs who want to build businesses with open data, republish, repackage and make the government more efficient. This latest development to FBO.gov has been difficult to companies already using data from the site, Hollister said.

According to David Schoenbrod, professor at New York University Law School and resident scholar at the American Enterprise Institute, this isn’t the first time a promise for transparency and open data has been broken by the administration.

In 2011, Schoenbrod wrote an op-ed for Politico on the Office of Management and Budget’s refusal to release the budget model, previously available online. After filing a request with the head of OMB, an appeal under the Freedom of Information Act, as well as follow-up appeals, he still has not had any luck getting his hands on that data.

“Unfortunately, the administration is not living up to its promises of open data,” Schoenbrod said.