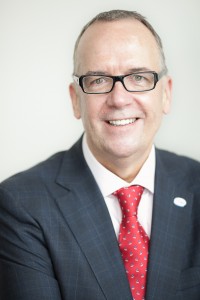 Nigel Ballard is Intel’s director of federal marketing and a FedScoop contributor.

You’ve probably read at least a dozen times already that the so-called wearable segment will be huge in 2014. From my vantage point, such as it is, I see a mad scramble from vendors known and unknown to get into this space. Why? Because it’s a new market sector, there’s everything to gain and the field is green and wide open. You don’t have to prove yourself up against any of the big brands because as of today, nobody has a controlling interest.

Innovation plus venture capital funding beats or has the potential to beat the Fortune 100 tech companies. There’s no rule book regarding what makes a successful wearable product, and it’s too early to call any of them a flop.

The highest-profile wearable today is the ambitious Google Glass, which isn’t even shipping yet. I count myself among those Glass Explorers, but as I write this, mine sit on the table behind me. Why? I’m more pragmatist than enthusiast when it comes to doing actual work as opposed to just geeking out. Glass is fun, “trick” and has promise, but I wear glasses, have astigmatism and happen to believe that today, and for mass-market appeal, a wearable device on your wrist makes way more market sense than one on your head.

I have a personal blog on my website at http://www.joejava.com, and I used to have a Google Glass page there. But I tired of reporting endless stories about how Glass was going to “change the way be build cities” (sic). And so I swizzled it to a wearable page, and my, how the visitors grew. Their domains show me they are indeed largely made up of those Fortune 100 companies. This space is hot and hopping!

Everybody outside Apple knows, or thinks they know, that an iWatch is coming, we just don’t know what it will feature and when it will arrive. The smarter money is on a curved touch glass design with wireless charging. They’re probably waiting for the Bluetooth 4.1 specification to get fully baked before they commit to production silicon. Knowing Apple, it won’t just be the assembly of other people’s chips and screens; there will be that certain something or somethings that will separate it from the mass of lookalike products that will surely pour out of Asia within in a few short months of its availability.

Apple has had leak problems of late; casings from the 5S and 5C were all over the interwebs months before the official launch. This bodes well for Vietnam, which has better, (read, lower) labor rates than China. Vietnam is also a dexterous nation and it promises not to kiss and tell.

Where are the wearables today? That would be the fitness and wellness market. Clips, straps or bangles that record your steps (activity) just like the pedometers of yesteryear, but in a much sexier hi-tech way. The better ones incorporate altimeters and fancy displays and do other things like analyze your activity. Every article I’ve read seems to claim one or another is the victor, so there’s no agreement on which is tops right now. I’ve owned and used two; both have inherent strengths and weaknesses befitting a burgeoning product segment.

The fitness do-dat you wear today will be old hat in none month’s time. That, my friends, is how life is on the technology bleeding edge. To tote the latest toys, you have to accept some rough edges. Nothing is perfect, but then again, nothing in life ever is. So, suck up the shortfalls and show off your new gadget at the water cooler and do it quickly!

So, what am I going to do when the iWatch or rumored Google watch appears? I already have a Nike FuelBand SE on my wrist; do they expect me to wear the watch on the other wrist? Wrong. Tout le manufacturers better combine the recording features of the fitness band with the “don’t-need-to-remove-your-phone-from-your-pocket” alerting, incoming call screening, automatic timezone setting convenience of the SmartWatch into a single product, otherwise I’d call that a big fat fail. I’m looking for a twofer here!

Now, I get to reuse the title of my article: They aren’t only wearable, they’re shareable, and that’s almost as important as the measuring of your Himalayan trek to Safeway’s and back. Now, you must share the sweat (steps) with your social network. If you’ve done really well, then you get to feel superior. If you’ve done really poorly, then you get to shame yourself in public, but best of all you get to compete against your friends and co-workers. And that truly healthy competition is what ultimately drives many of us to do better, eat healthier, be a bit thinner, walk farther than our friends and WIN. Hey, whatever it takes to shed the weight, right? #WINNING

I’m walking the long way round into 2014, I hope to see you there, and regarding my daily step count, if you show me yours, I’ll show you mine.