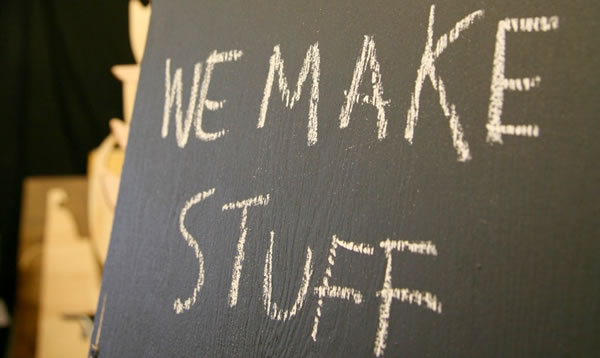 Mark Drapeau is the new Lifestyle Editor at Fedscoop. This is his first post.

In 1998, renowned science fiction novelist Neal Stephenson wrote an essay called “Why I am a Bad Correspondent,” in which he describes why he spends as little time as possible directly interacting with readers.

“Writers who do not make themselves totally available to everyone, all the time, are frequently tagged with the ‘recluse’ label. While I do not consider myself a recluse, I have found it necessary to place some limits on my direct interactions with individual readers…

Writing novels is hard, and requires vast, unbroken slabs of time. Four quiet hours is a resource that I can put to good use. Two slabs of time, each two hours long, might add up to the same four hours, but are not nearly as productive as an unbroken four. If I know that I am going to be interrupted, I can’t concentrate, and if I suspect that I might be interrupted, I can’t do anything at all…

The productivity equation is a non-linear one, in other words. This accounts for why I am a bad correspondent..If I organize my life in such a way that I get lots of long, consecutive, uninterrupted time-chunks, I can write novels. But as those chunks get separated and fragmented, my productivity as a novelist drops spectacularly.”

Creative workers like artists, writers and software developers need unbroken periods of time in order to make their products. For many, it’s mandatory. Four one-hour blocks interspersed with four one-hour conference calls is very different than a solo creative period from 8 a.m.- 12 p.m and a team brainstorming session from 12 p.m.- 4 p.m.

Paul Graham of Y Combinator fame called these two styles of work — unbroken slabs of time vs. numerous shorter meetings — the “maker schedule” and the “manager schedule” in a classic 2009 blog post.

Graham describes how most of the people who make a tech startup run — programmers — operate on maker time, but how their bosses and the venture capitalists can screw everything up by scheduling a meeting on manager time.

In my experience, startups, large companies, and government agencies are not so different in this respect. People who run things tend to be managers operating on a manager schedule with manager metrics of success, and some of the people who work for them are creatives who wish to operate on a maker schedule but have a hard time doing so (because of the managers).

As a maker within a bureaucracy, you may discover tricks for hacking the managers. At Microsoft, I have discovered that with planning I can block off entire mornings in my calendar for 2-3 days in a row, in order to write things like what you’re reading now or simply relax and think about a tough challenge, feeling comfortable that the nearest meeting on my calendar is hours and hours away.

Another hack I’ve learned is using Sunday for creative work and then taking Friday “off.” I feel perfectly fine about taking the occasional six-hour lunch with friends because I was smart enough to find an unbroken six-hour block of time to actually get something done.

Any creative will tell you that this stuff works. Relaxing your mind and focusing on something is often when you become free to discover insights that really matter and can set you apart as an employee.

“But wait,” you may be saying to yourself, “Mark Drapeau has some kind of special arrangement.” Well, I’d be lying if I said I didn’t have flexibility built into my job, but I have to deal with countless meetings and conference calls just like anyone else working in a bureaucracy. The flexibility to hack your schedule lies along a spectrum.

Earlier this month, July 4th fell on a Wednesday, thus many Federal employees worked Monday and Tuesday, had Wednesday off, and then returned to work Thursday and Friday before another weekend. You may call this a Federal holiday; I call this a “natural experiment” involuntarily hacking Federal employees’ calendars from a manager schedule to a maker schedule.

On Twitter, my Microsoft colleague Alfred Thompson tweeted, “2 days of work followed by a single day of holiday and going back for 2 more days of work is just weird.”

In reply, his acquaintance Sheryl Nussbaum-Beach, who works on education reform, said, “What if it was the norm? What if we took the mid week day to do deep personal learning each week? Think of what we could [accomplish].”

If you’re an enlightened federal manager, here’s a hack for you: What if you made the first Wednesday of every month “independence day” for your team — a 100% unscheduled day on maker time?

Maybe some people would abuse such a privilege and accomplish nothing. But in the vein of Google’s famous “20% time” where employees can pursue projects they’re personally interested in, I wonder what innovations might come out of a monthly “independence day” during which people could learn a new skill like Python programming or mastering Pinterest, attend an interesting luncheon event outside the office, or just read that strategy book they bought months ago?

Working as I do for the company that actually makes Outlook, you can imagine that Microsoft employees are pretty good at using it to schedule meetings with each other. It’s deceptively easy to get caught up in a series of meetings and conference calls and feel like you had a full day. But the real question is, did you “make” anything interesting today?

Everything I’ve done that I’m proud of, or that people have noticed, has been done on a maker schedule. But working within a manager schedule, I’ve had to hack my life to find the time to make things happen.

What are some of your federal workweek hacks for getting creative things done?