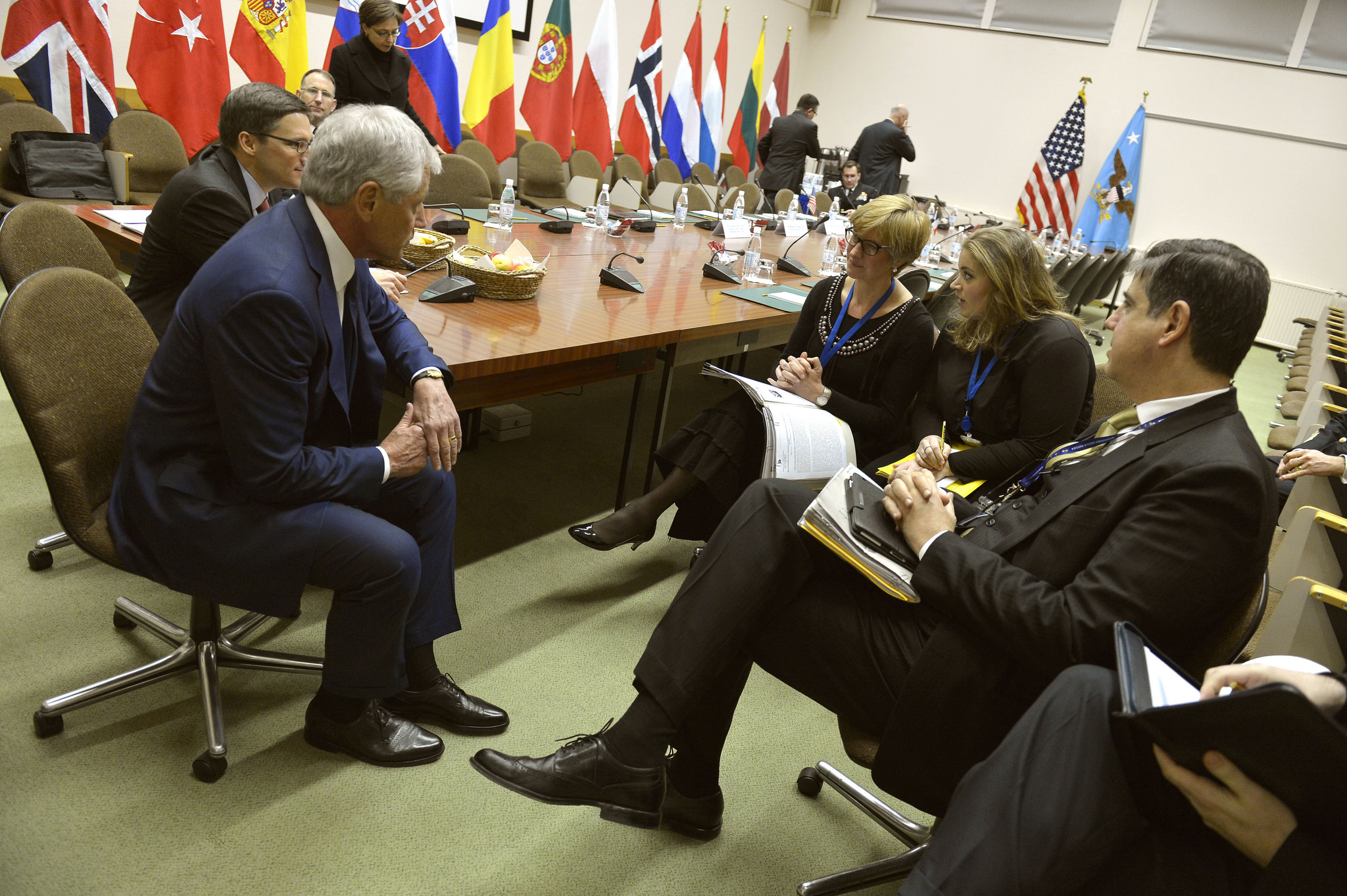 Defense Secretary Chuck Hagel last week delivered a sobering message to America’s military allies in Europe: The United States expects NATO countries to be smarter about how they spend their dwindling defense budgets and to modernize.

“I made clear my conviction to buy readiness and to buy capability and combat power with the savings the United States military achieves through a smaller force. We expect NATO allies to do the same,” Hagel said, speaking Feb. 27 at NATO headquarters in Brussels, where he met with his European counterparts during a two-day NATO defense ministers conference.

“We must focus not only on how much we spend, but how we spend it strategically and is it effective, and are we together,” Hagel said. “These are tough budget issues we’re all having to face. But when you are in those kinds of environments, you need to prioritize.”

Hagel’s comments come as he prepares to deliver a drastically reduced post-war Pentagon budget to Congress and as NATO faces one of the first major European security crises in decades as Russian forces expanded their control of Ukraine’s Crimea region. And while it may be too early to declare the return of the Cold War with Russia, it is certainly not too early to acknowledge the cold, hard reality NATO countries face in the post-Afghanistan era.

“As allied nations confront fiscal pressure on both sides of the Atlantic and as NATO transitions out of its combat mission in Afghanistan, many of us plan to field smaller military forces in the years ahead,” Hagel said. “That is understandable. It’s realistic. This is a time to set priorities, to make difficult choices, and to reinvest in the key capabilities we will all need for the future, including those that have been neglected over the last decade of war.”

According to the Pentagon, during his meetings in Brussels, Hagel stressed the need for America’s NATO allies to invest in global reach, technological superiority and leading-edge capabilities such as cybersecurity and special operations.

“Resources have to match the mission and capabilities are critically important,” Hagel said. “And it’s critically important that this institution, this organization continue to keep the edge that we’ve had over the years since it was established — that technological edge.”

According to Rasmussen, NATO’s Connected Forces Initiative — an effort to enhance communications and integration between NATO countries — will be a main focus of discussion during the next NATO Summit, scheduled to take place in September in Wales.

“We are looking at ways to fill capability gaps,” Rasmussen said. “I appreciate that the European Council in December adopted conclusions with a focus on intelligence, surveillance, reconnaissance, including drones, and a focus on air-to-air refueling. I think European allies could come forward with more contributions to missile defense.”

One of NATO’s key technology programs is the Alliance Ground Surveillance system, which is being built around five Global Hawk unmanned aerial vehicles. Fifteen NATO countries are participating in the acquisition of the system, which is scheduled to come online in 2017.

But there remain significant doubts as to whether or not the pace of European investment will be strong enough to maintain needed modernization efforts. The combined defense expenditures of all 28 NATO members in 2013 totaled $1.02 trillion. And while that still means NATO is by far the largest military force in the world, the capability gap referred to by Rasmussen has largely fallen on the shoulders of the United States. And that gap may get worse before it gets better.

According to NATO analysis, between 2007 and 2013, the share of U.S. expenditures has increased from 68 percent to 73 percent, while European expenditures continued to decrease as a whole.

“In my lifetime, post-World War II, I don’t know of a more uncertain, tenuous, complicated, dangerous time in the world in most regions of the world than today,” Hagel said. “Technology has driven new threats … that we didn’t have 10 years ago. Cyber warfare, the potential of destruction to a country via a cyber attack without anyone firing a shot, with an uncertainty of where it’s coming from; the paralysis that it could bring to a nation, essentially decimating an economy. That’s just but one example,” Hagel said.

“So I think if, for no other reason, that new environment, the new realities that face us all, present a new kind of challenge — and it’s not a challenge that can be deferred,” he said, responding to questions about how the U.S. can convince a reluctant Europe to invest savings from troop reductions in modernization programs. “This is a challenge that’s right now, that is absolutely right now.”
Follow @DanielVerton