A comprehensive review of the Military Health System released Wednesday found that the Pentagon’s 56 hospitals and 361 clinics generally provide the same quality of care found in the private sector, but the department lacks concrete data and analysis capabilities that could help it improve performance, safety and access to care, especially at facilities found to be significantly underperforming in certain categories.

“Today I’m directing all health care facilities identified as ‘outliers’ in the categories of access, quality and safety to provide action plans for improvement to Deputy Secretary Work within 45 days,” Secretary of Defense Chuck Hagel said during a Pentagon press briefing announcing the report’s findings. “I’m also directing the department’s health care leadership to establish a systemwide performance management system that will help scrutinize lapses and monitor progress.” Hagel also ordered that all available data on the Defense Department’s health care system be made public. 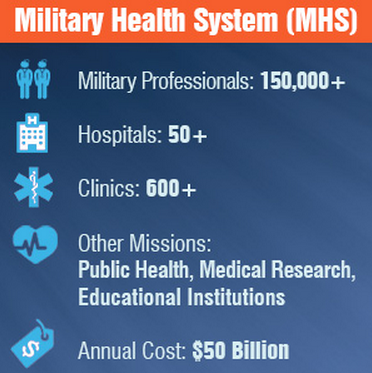 The 700-page review, led by Deputy Secretary Work, found that three of the 17 hospitals surveyed performed below national standards for surgical complications and the overall military health system rated poorly on some standards for obstetrics care.

“This was an extremely honest assessment,” Work said. “We don’t want a good health care system, we want a leading health care system, among the best in the United States. We have no crisis,” but there are concerns about the accuracy of the data DOD has been able to collect from the system, as well as the department’s ability to analyze the data to make decisions about needed changes, he said.

The review identified a major gap in the ability of the MHS to analyze systemwide health care information. “Although the MHS has a wealth of data, the ability to analyze those data and use the results to guide decision-making in quality and patient safety is nascent,” the final report states. “The MHS should develop an enterprise-wide quality and patient safety data analytics infrastructure, to include health  information technology systems, data management tools, and appropriately trained personnel. There should be clear collaboration between the Defense Health Agency’s analytic capabilities, which monitor the MHS overall, and the Service-level analytic assets.”

When it comes to measuring access to care, for example, “Our data is not actually reflecting what our beneficiaries perceive,” Work said. “Even though we are meeting our own standards, there is some variation, and we have to dig down deep into this. We’re a little cautious right now because we want to see if the data is telling us what is really happening.”

Laura Junor, the principal deputy undersecretary of Defense for Personnel and Readiness, said “no hospital systematically underperformed” in any category. “Our data are telling us that we’re meeting the standards that we set for ourselves. But when we spoke to our beneficiaries, they were telling us a slightly different story, that there were access challenges. We don’t understand the discrepancies in those two information streams but we’re going to.”

In addition to establishing a performance management system based on common standards, Junor said the Pentagon is planning to set up a central analytic capability that will enable officials to understand why some hospitals are high-performers and how to improve low-performers. But one area that remains a challenge is collecting and analyzing data for care provided by civilian health care facilities.

“It takes time and effort to ensure data validity and accuracy in a system as large as the MHS, and further assessment is required. The same can be said of those areas where the data are incomplete. This was a particular challenge in attempting to assess the purchased care component,” the report stated. “The ability of the MHS to evaluate the quality of care is dependent on the data provided by civilian providers.”

The Pentagon’s plans for deploying a new electronic health record system will likely improve the ability of the department to track data, said Assistant Secretary of Defense for Health Affairs Dr. Jonathan Woodson. “It’s also about building the systems so that you can mine the data sets, derive the information you need to produce the actionable items that you need to work on.”