The United States Postal Service is still recovering after a cyber intrusion compromised the data of 800,000 of its current and former employees earlier this year, but that doesn’t mean that the agency’s information technology agenda for 2015 stops at cybersecurity.

Since the breach, USPS has made a number of relatively major infrastructure and account management changes, according to John Edgar, USPS’ vice president of information technology. Now the agency is positioning itself toward the next phase of response to the breach: recovery.

“We’re doing OK,” Edgar told FedScoop. “We are now in the middle of planning the next phase of [response], which we’ll be implementing at a future date. We’ll be continuing to incrementally improve the security posture of the organization and deal with the infrastructure, the operational and the end user behavioral changes necessary to raise the overall security level.”

And though cybersecurity and protecting against another future breach will remain a huge part of any future IT initiative out of the Postal Service, Edgar and his team aim to make cloud computing, mobility and analytics the focal points of the agency’s 2015 IT agenda.

With cloud, as the agency has rolled out its use of developing internal apps with the ServiceNow platform, Edgar and his team now must start looking at the agency’s model of managing several different applications. In addition, the IT team will look at the legacy applications within the organization and evaluate which ones could be adapted to a new cloud solution and which ones should be left behind.

One of the ways to increase that accessibility, Edgar said, is through mobility. Right now, the agency has about 15,000 smartphones and tablets across the organization. If the agency looks at the legacy applications and adapts them to a mobile-friendly cloud solution, those apps could be the key to unlocking access to the company’s data at several different points in the agency’s structure.

“So they can get access not just to the application, but the data, the information within it and more advanced analytics all about that information so [employees and managers] can make near-real-time decisions as they’re out on the floor and not sitting behind a desk,” Edgar said.

With more applications in more formats, analytics becomes incredibly important, Edgar said. Now, the agency is in the process of standing up a Hadoop cluster to build what Edgar refers to as a data lake, which will allow USPS to take a lot of the new data the agency is collecting and build the right model to take them to the next level of performance. The analysis will be conducted by a combination of USPS-employed data scientists and analysts, and contracted experts.

“Today, that data is segmented. Some of it is in our data warehouse, but a lot of it is in the original source systems of record, and obviously, from an operational standpoint, you’ve got to be careful about how people use that information within the systems of record so you don’t affect performance,” Edgar said. “We want to take that information and put it into this data lake, in a secure way, where the analyst will be able to have the advanced analytical tools to build the operating models to look at business in the future.”

Also in 2015, Edgar plans to use analytics and geofencing technology to help create dynamic delivery routes for letter carriers to save on time and fuel costs. The agency also will continue to deploy new tech-equipped mail scanners to allow for better communication between the physical post office and the letter carrier while on a route. 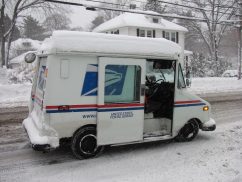 In addition, the agency is beginning to look at how it can replace the nearly 160,000 long-life vehicles that are now almost four years past their projected lifespan. Edgar said when these vehicles are replaced, they will be replaced with new vehicles that increase the communication and tracking capabilities of the vehicles while on their routes.

If everything goes perfectly in 2015, at the end of the year technology will have been the key to the agency’s ability to enhance and innovate the way USPS does business, Edgar said.

“Through technology, we would have made significant enhancements to allow the organization to operate more efficiently, to have reduced our operating costs, to have improved our mail service above where it is today and continued to provide an enhanced and more efficient service to all of our customers across the country,” Edgar said. “The integrated technology that we bring would be a key driver in enabling that to happen.

Edgar added, “I think that’s really what we’re trying to do. It’s about taking advantage of new technologies and using them to increase the speed that we can deliver solutions and the ease with which our users can access those solutions for the benefit of the business.”