Less than a year since a small team of private sector technology experts attempted to save the flawed healthcare.gov marketplace, the Office of Management and Budget is launching a new team to help recreate the government’s digital experience.

Mikey Dickerson, who worked for Google at the time of the initial healthcare.gov rollout, was one of the original subcontractors brought in to fix the website’s issues.

Earlier this year, while speaking at the Stewards of Change conference about the healthcare.gov project, Dickerson said the team that went in to fix the website didn’t think there would be much success.

“Honestly, no one anywhere thought there was very much of a chance of success at this point, late in October,” Dickerson said. “We figured that we would give it our best shot and go home a few weeks later and disappear into the shadows and never be heard from again.”

Dickerson didn’t disappear. Instead the former Google employee will take a full-time federal role as the administrator of the Digital Service and also serve as deputy federal CIO.

The pilot version of Digital Service will kick off now using funding allocated in the fiscal year 2014 budget; however, President Barack Obama requested $20 million for the digital service in fiscal year 2015, which begins Oct. 1. Regardless of the amount actually appropriated for the service, the project would scale to what is allocated for fiscal year 2015.

The blog post identifies the unit as a “small team made up of our country’s brightest digital talent” that will work with agencies “to remove barriers to exceptional service delivery and help remake the digital experience that people and businesses have with their government.” It will also establish a set of standards to use private sector examples to modify the government’s digital services.

The administration released the Digital Services playbook alongside the announcement of the new initiative. Inside the playbook, 13 “key plays” drafted from public and private sector examples address topics from how a federal government website should be designed to how agencies should incorporate the use of open data and security practices into their other digital digital services. The playbook, which is posted on the cio.gov website, is also available for download from GitHub. 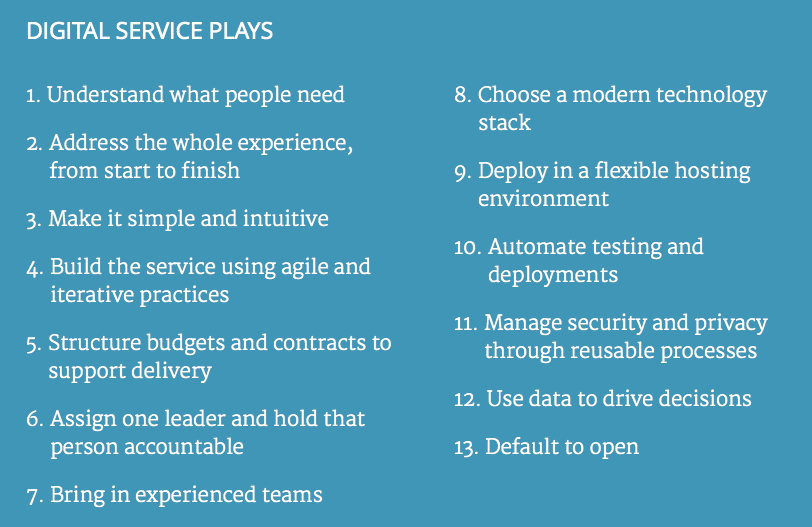 As a companion to the strategies identified in the playbook, the administration also released a handbook for how agencies can use the Federal Acquisition Regulation to achieve some of the objectives included in the Digital Service playbook.

The TechFAR handbook, as it is called, recommends agile development – a strategy that emphasizes fast-paced development that provides software to users in a quicker manner.