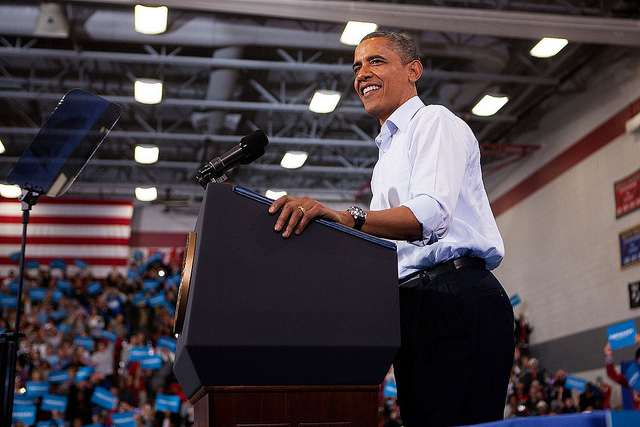 With the 2012 Presidential Election on Tuesday, FedScoop excerpts key quotes from President Barack Obama and Republican challenger Mitt Romney to help provide insight into how each would manage the country going forward.

Here we look at President Barack Obama and his thoughts on four key issues.

The American people must be able to trust that their government is doing everything in its power to stop wasteful practices and earn a high return on every tax dollar that is spent. To strengthen that trust and deliver a smarter and leaner government, my administration has reinforced the performance and management reform gains achieved thus far; systematically identified additional reforms necessary to eliminate wasteful, duplicative, or otherwise inefficient programs; and publicized these reforms so that they may serve as a model across the federal government.

Earlier this year, President Obama and Secretary of Defense Leon Panetta laid out $487 billion in defense budget cuts over the next decade. Obama has said, even with the cuts, the country’s military will remain the strongest in the world.

Military spending has gone up every single year that I’ve been in office. We spend more on our military than the next 10 countries combined; China, Russia, France, the United Kingdom, you name it. The next 10. And what I did was work with our joint chiefs of staff to think about, what are we going to need in the future to make sure that we are safe?

… We need to be thinking about cyber security. We need to be talking about space. That’s exactly what our budget does, but it’s driven by strategy. It’s not driven by politics. It’s not driven by members of Congress, and what they would like to see. It’s driven by, what are we going to need to keep the American people safe? That’s exactly what our budget does, and it also then allows us to reduce our deficit, which is a significant national security concern. Because we’ve got to make sure that our economy is strong at home so that we can project military power overseas.

The approach that Governor Romney’s talking about is the same sales pitch that was made in 2001 and 2003, and we ended up with the slowest job growth in 50 years, we ended up moving from surplus to deficits, and it all culminated in the worst financial crisis since the Great Depression.

Bill Clinton tried the approach that I’m talking about. We created 23 million new jobs. We went from deficit to surplus. And businesses did very well. So, in some ways, we’ve got some data on which approach is more likely to create jobs and opportunity for Americans, and I believe that the economy works best when middle class families are getting tax breaks so that they’ve got some money in their pockets, and those of us who have done extraordinarily well because of this magnificent country that we live in, that we can afford to do a little bit more to make sure we’re not blowing up the deficit.

On the middle class

President Obama said he’s fought for the middle class during his four years of office and already cut taxes for middle class families by about $3,600.

So four years ago I stood on a stage just like this one. Actually it was a town hall, and I said I would cut taxes for middle-class families, and that’s what I’ve done, by $3,600.00. I said I would cut taxes for small businesses, who are the drivers and engines of growth. And we’ve cut them 18 times. And I want to continue those tax cuts for middle-class families, and for small business.

But what I’ve also said is, if we’re serious about reducing the deficit, if this is genuinely a moral obligation to the next generation, then in addition to some tough spending cuts, we’ve also got to make sure that the wealthy do a little bit more.

So what I’ve said is, your first $250,000.00 worth of income, no change. And that means 98 percent of American families, 97 percent of small businesses, they will not see a tax increase. I’m ready to sign that bill right now. The only reason it’s not happening is because Governor Romney’s allies in Congress have held the 98 percent hostage because they want tax breaks for the top 2 percent.

Barack Obama, Commentary, Guest Columns, In their own words