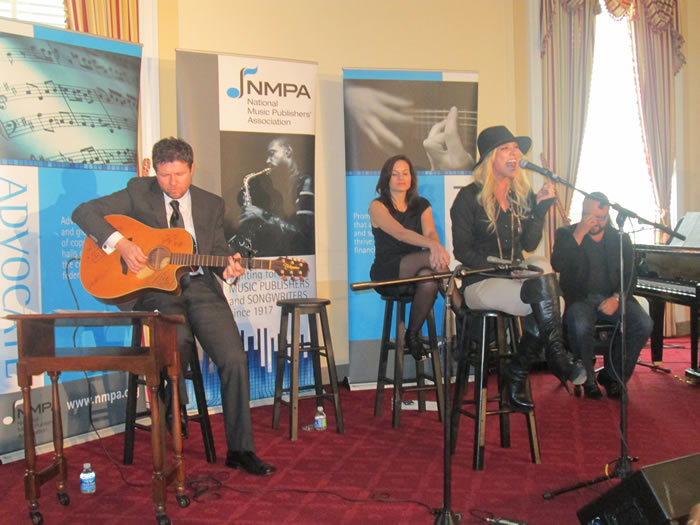 The Hill staffers you may have heard singing in chorus to “Living on the Prayer” this week were not referencing the fiscal cliff debate.

On Wednesday, five hit songwriters offered a mini-concert to lawmakers and congressional staff.

The artists, including former American Idol judge Kara DioGuardi and Grammy award winning writer Desmond Child, who have penned hits for everyone from Bon Jovi to Carrie Underwood, were in Washington to drown out the sounds of Joe Kennedy, chairman and CEO of Pandora. Kennedy testified before the House Committee on the Judiciary at a hearing on intellectual property. Kennedy supports legislation that would reduce royalty fees for streaming music.

The National Music Publishers Association and the songwriters they hosted on Capitol Hill sing a different tune on the issue.

“Being songwriters, we all love technology,” DioGaurdi told the audience, “but we want to want to be compensated fairly.”

DioGaurdi sang “Sober” a song she wrote that earned Pink a Grammy nomination. Also performing were Linda Perry, who sang “Beautiful” which became a hit for Christina Aguilera; BC Jean, who told the crowd dieting after a bad break-up inspired her to write “If I Were a Boy,” which became a Beyonce single; Lee Thomas Miller, a Nashville hit writer, sang “You’re Gonna Miss This,” a tune that became a Billboard Number One for Trace Adkins; and Child, who started the sing-along when he invited the audience to join him in singing “Living On a Prayer,” a “song he wrote with a couple of long-haired guys from New Jersey.”

by Dave Nyczepir • 51 mins ago
Acquisition