The Defense Department can’t agree on an internal definition for cloud computing, and it’s preventing officials from measuring any savings or benefits from the technology, according to an agency watchdog.

In a report released Tuesday, the DOD inspector general found the department and three of the four military branches have differing knowledge of various cloud computing contracts and varying opinions on what exactly constitutes a cloud computing service.

According to the report, the DOD leans on the National Institute of Standards and Technology’s definition of cloud computing, found below: 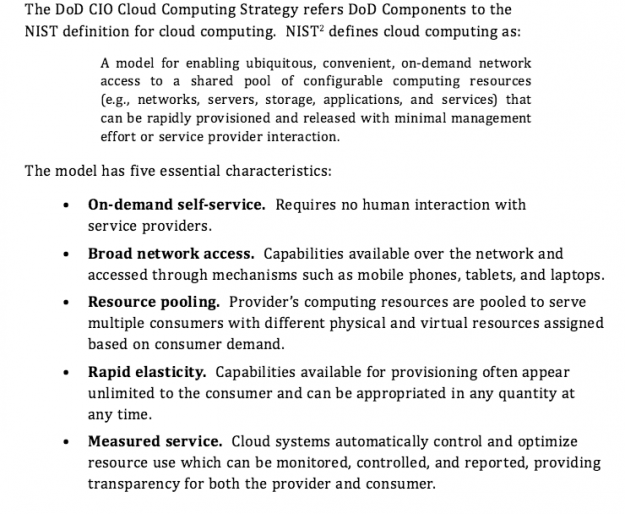 However, various military branches and the Defense Information Systems Agency said they didn’t always adhere to those five characteristics, due to what chief information officers called a lack of clarity or a service’s inability to meet a characteristic.

“DISA representatives concluded that the designation of an IT service as cloud depends on an individual perspective,” the report reads.

When the IG’s office tried to measure exactly what was purchased from fiscal year 2011 to 2014, DOD and the military branches could not agree on how many cloud contracts actually existed. The DOD CIO’s office said the Army had three indefinite-delivery, indefinite-quantity contracts, and the Navy and Air Force each had two. The Army, however, told the IG it had nine IDIQ cloud contracts, the Air Force said it had one, and the Navy said it had none.

Additionally, the report finds that the IT reporting systems DOD used to track cloud contract information do not provide the CIO’s office with a level of detail needed to analyze services from a business perspective.

The system’s shortcomings, combined with the confusion over contract vehicles and cloud computing definitions, have made it impossible to determine if DOD’s cloud computing initiative has been effective over the last three years, the report argues.

The IG recommended that DOD issue its own departmentwide standard for cloud computing and establish a repository that gives more insight into department contracts.

In response, DOD Principal Deputy CIO David DeVries said both recommendations are in process or have already been fixed. The IG disagreed with that notion and requested more comments from the CIO’s office before Jan. 27.

Read the full report below.