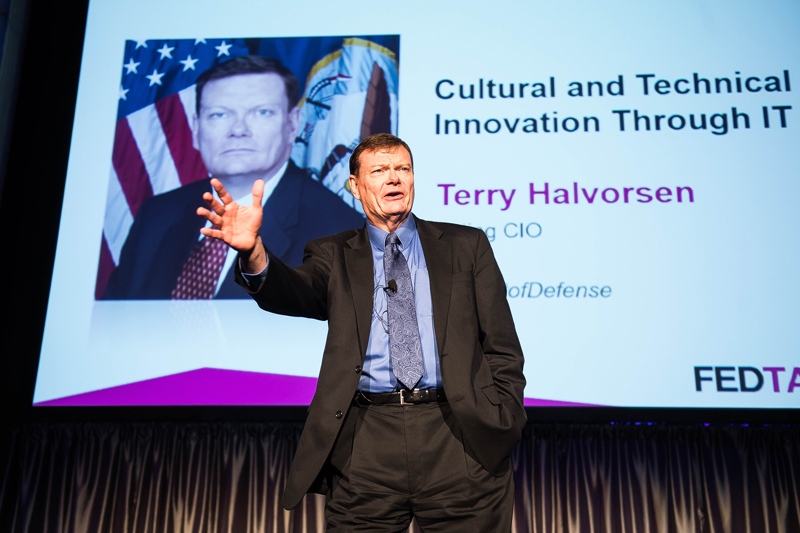 Defense Department Acting CIO Terry Halvorsen, speaking Nov. 6 at the 2014 FedTalks conference in Washington, D.C., said the biggest challenge for IT and information sharing is not technological, but cultural. (Credit: FedScoop).

Terry Halvorsen likes to think of himself as the acting chief information officer of the biggest company on the planet — that’s right, a Fortune 0 (as in zero) enterprise where everything starts with the Defense Department and gets smaller and less complicated from there.

And that’s just the beginning of the challenges he faces when it comes to moving the world’s largest IT portfolio to the cloud, making a global workforce more mobile, integrating a global enterprise that operates at multiple security levels simultaneously and often during ad-hoc crisis situations, and doing all of this while improving security and significantly lowering costs. It is not a job for the faint of heart.

The former Navy CIO has already set a clear course for change throughout the department since assuming the acting CIO role six months ago. But the biggest challenges facing the Pentagon, Halvorsen acknowledged during a Nov. 6 keynote presentation at the 2014 FedTalks conference in Washington, D.C., are cultural.

“I was not maybe thrilled with the original cloud policy that came out, mostly because I don’t think we were getting to cloud fast enough,” Halvorsen said. “There are people who believe their data needs to be right on the table next to them [where] they can touch it, see it, see their server blink. We can’t operate that way anymore. It’s an inefficient way to operate, it’s a costly way to operate and frankly in the long run it’s a less secure way to operate.”

In an interview with FedScoop after his presentation, Halvorsen said the financial justification for moving to distributed data storage is getting stronger every day. “In many cases you can get a 40 percent cost reduction by moving to a venue of commercial storage,” Halvorsen said. “So it comes down to talking to [data owners] to make sure they get ‘hey, your data is still there, you can reach it whenever you need it. It’s secure and, in fact, it’s more secure at less cost … and your overall cost will come down.’”

Halvorsen has already signed off on the department’s new cloud policy and plans to release it publicly in about two weeks after officials have had time to review it internally. The longer you listen to Halvorsen talk about the new policy, the clearer his strategy becomes: The Defense Department is going to get to the cloud faster by distributing the contracting work, and it will save money by forcing industry to offer cloud services for a price less than what it would cost the Pentagon’s own network provider, the Defense Information Systems Agency, to provide the same services.

Contrary to early press reports, the new policy does not remove DISA from the process, but rather it allows the DOD components to procure cloud services through their own contracting offices. DISA must still be considered when commercial cloud options are priced too high and will be responsible for security. “It really makes you go faster. It’s just the law of numbers,” Halvorsen said. “We’ve got to go faster, and that just means I’ve got to increase the number of people who can do the contracting work.” 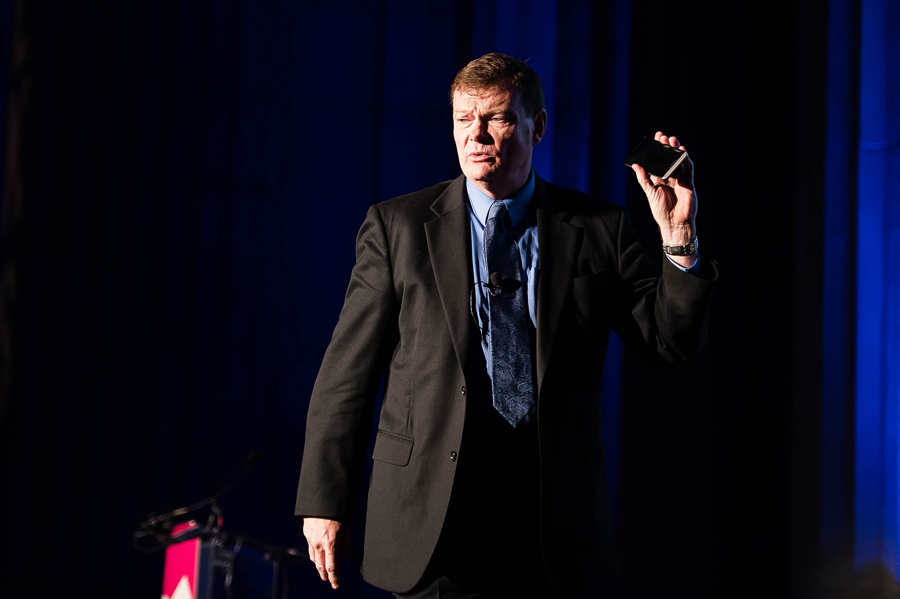 “We’re just about ready to tell everybody you can have one of these,” said acting DOD CIO Terry Halvorsen, holding up his personal Blackberry phone during a keynote presentation at the FedTalks conference. (Credit: FedScoop)

“We’ve got to think about mobility too, and I think the cloud enables us from a mobility standpoint,” Halverson said. “I could do a lot more if that data’s sitting in a distributed environment that is more accessible to our employee set or other users of our data.”

About halfway through his FedTalks presentation, Halvorsen held up his personal mobile device. “We’re just about ready to tell everybody you can have one of these,” he said. “This is still a Blackberry, still a government-provided device, but now I have personal space on this. I have my personal email, I have personal apps. One device integrated with the personal side of the business. That’s a big thing for us to do because I think it’s an admission that our workforce, both civilian and military … particularly the younger part of our workforce … is demanding different things. We’ve got to accommodate that somewhat.”

Halvorsen’s use of the word “somewhat” was a deliberate choice. While the department is moving to accommodate the computing needs of a new workforce, it still must maintain a high level of security and control over what is allowed on the network. And some progress has been made. This week, for example, the department plans to release the first secure mobile phone for use by combatant commanders. It will allow them to access email and conduct clear voice calls, as well as read and send faxes. The next major update to this capability is scheduled for January 2015.

“That’s not a technology leap. That was a cultural leap to say, ‘Yeah, you can do this. It works, and the risk is OK,’” he said.