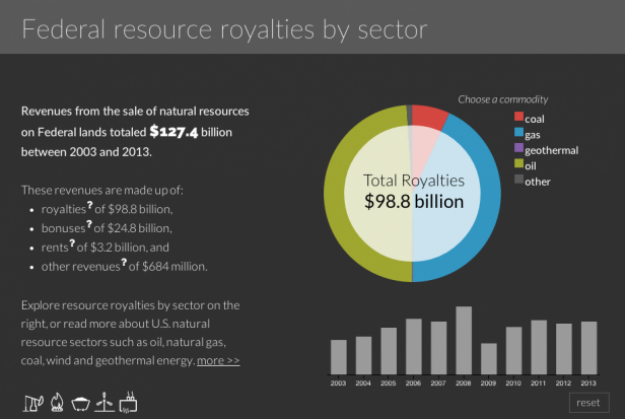 It was the departure of an Interior Department Presidential Innovation Fellow that helped jump-start work on a recently unveiled open data portal.

When fellow Michelle Hertzfeld left the department’s Office of Natural Resources Revenue for a rotation at General Services Administration’s 18F, she opened the door for the two agencies to work together on the project, said Judith Wilson, the lead of the U.S. Extractive Industries Transparency Initiative secretariat.

“We were upset that she was leaving us …,” Wilson told FedScoop. But “that’s when we began having discussions about a possible interagency agreement with GSA to have their 18F team work with us designing, developing and deploying the data portal.”

After initial talks, the agencies signed a 15-month agreement over the summer that the Interior Department office would pay $240,000 in exchange for 18F’s help. And this month, they debuted the portal, which for the first time allows users to access information about the natural resource revenue the federal government receives from developing various energy and mineral resources on public lands and waters.

“We wanted to be able to provide publicly available data to the public in a more accessible format,” Wilson said. “Our goal was to try to find from a reliable source what we think will be meaningful relevant information to the public.”

Wilson said another huge driver of the efforts was to qualify the United States as a candidate country for the Extractive Industries Transparency Initiative, an international effort to open revenue data related to natural resources.

To begin the program, ONRR brought potential users to a design workshop it hosted with 18F.

“We invited them to participate in helping define who these user profiles may be, who the users may be, the kind of information those users might be looking for and how we could visualize the information to make it more intuitive and make it so the general public could comprehend it in a more readily available fashion,” Wilson said.

Initially, the team looked at three different visualizations, which translated into the three currently displayed on the data portal, Wilson said. Since the design workshop, ONRR and 18F have been creating the portal with agile development in two-week sprints. Their work is posted on GitHub and operates on open source software.

“This version of the data portal is definitely just the starting point,” Wilson said. “We still have so much information we haven’t been able to figure out how to visualize.”

Eventually, Wilson wants the portal to be able to look at revenue data right down to a user’s ZIP code — a feature that could help members of Congress examine the resource data from their districts.

“There are so many different things we can put into this site, and evolve it into,” Wilson said. “The beauty of it is the public can feed into this and let us know what we should be aware of and their desires for the portal.”

In between adding more data sets from other offices across the Interior Department, Wilson said the agency is in talks with other similar agencies to help link their portions of open data together. This type of collaboration would be beneficial to ONRR and any agency it collaborates with, Wilson said.

“The Department of Interior has never presented this kind of revenue information at this level,” Wilson said. “It’s giving the public for the first time, I think, the ability to start the process of creating their own story, allowing the user to, through this interactive process, define the story they’d like to understand and to get.”