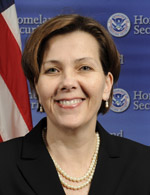 The Internal Revenue Service announced Peggy Sherry as the next IRS deputy commissioner for operations support, one of the top two positions under the IRS commissioner.

She will replace Beth Tucker, who retired at the end of September.

The deputy commissioner of operations support is tasked with directing support-focused functions. The position encompasses about 11,500 employees, including the CFO and CIO.

Sherry formally worked as CFO at the Department of Homeland Security. She also acted as the deputy CFO and financial reports supervisor for the U.S. Holocaust Memorial Museum.

She is expected to start Nov. 4.