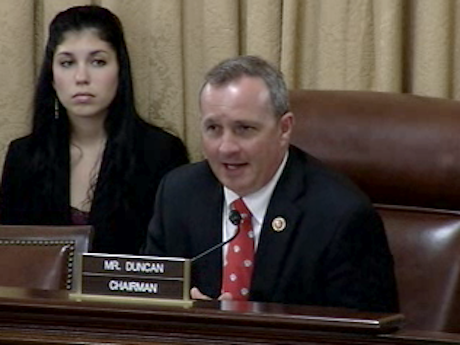 Although the Department of Homeland Security claimed its acquisitions process has improved dramatically since 2009, members of Congress still heavily criticized the department for “colossal acquisition failures” and “apathetic” oversight policies at a House hearing Thursday.

With plans to ultimately commit $167 billion to major acquisition programs, DHS has come under scrutiny for its acquisitions process, characterized during the homeland security committee hearing as favoring rapidity over proper documentation.

“How can DHS plan effectively if it does not know how much programs cost, when they will be completed, or what they will do?” he said.

Government Accountability Office reports in recent years found of the 77 major DHS acquisitions programs (those costing more than $300 million), 32 had none of the required documents to track cost, timeline and performance. Perhaps as a result, 42 of the 77 programs had cost growth, schedule delays, or both in 2012.

“What business in America could manage its finances that way and survive?” Duncan said.

“Officials explained that DHS’ culture emphasized the need to rapidly execute missions more than sound acquisition management practices, and we found that senior leaders did not bring to bear the critical knowledge needed to accurately track program performance,” she said.

Rafael Borras, DHS undersecretary for management, admitted to past shortcomings, but pointed to numerous improvements since 2009.

“Not only have we forged a comprehensive integration strategy, we have also demonstrated substantial progress,” he said, pointing to GAO’s 2013 high-risk report (a report in which DHS’ acquisitions program has been included since 2005). The 2013 report acknowledged the agency’s progress, narrowing the “high-risk” status to certain DHS acquisitions programs.

Since 2009, DHS has implemented an Office of Program Accountability and Risk Management, or PARM; emphasized performance data for high-level officials; and adopted “strategic sourcing,” a process to standardize purchases for common goods. The agency also looked to private sector best practices to establish the “Integrated Investment Life Cycle Management” in February of this year.

Borras explained the IILCM was “risk-based oversight, evaluation of major investments through portfolio management and access to reliable data from matured business intelligence to track the progress of investments throughout their life cycle.”

“The department has made substantial progress in many areas and if their integrated strategy is fully implemented, they are on a path to be removed from the High Risk List.”

But that’s a big “if.” Both Mackin and Duncan chastised DHS for failing to adhere to its own reforms. Mackin said if DHS didn’t follow through, its acquisition portfolio would become unaffordable; the agency would get less capability than expected for a higher cost than anticipated.

But Borras was insistent: “The department has made steady progress to improve the acquisition management discipline. While there is still additional work to do, we feel that the infrastructure enhancements position the department to sustain the significant progress made over the past four years.”

by Sara Wilson • 4 days ago
Tech