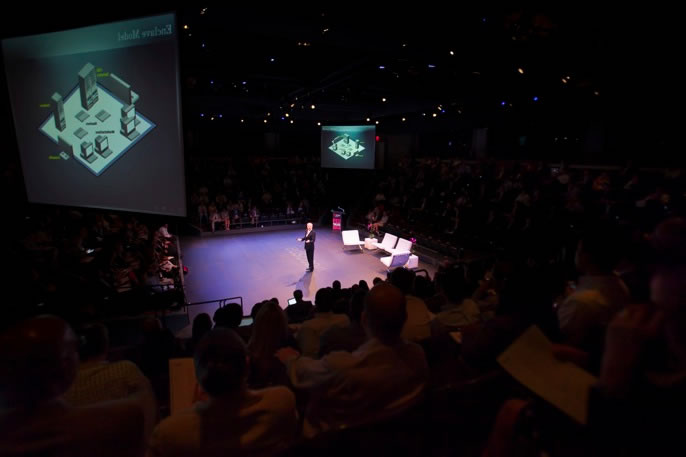 Cyber, cloud, sequestration and a man who pretended to be a pilot.

That was the scene Wednesday as more than 800 leaders from government and industry joined FedScoop for FedTalks 2013 at the Mead Center for American Theater in Washington, D.C., for a deep discussion of technology in the federal government.

The event also featured an impassioned keynote address from Frank Abagnale, the subject of the movie, “Catch Me if You Can,” who retold the story of his time as a con man posing as a Pan Am pilot. Abagnale now works with the FBI, catching criminals involved in fraudulent check scams.

The event opened with Cristin Dorgelo, assistant director for Grand Challenges in the White House’s Office of Science and Technology Policy, discussing how the Obama administration is trying to engage citizens to address large, modern challenges.

“We did this by going into our data and seeing which buyers were clicking on what links on our site, and the frequency of that, and figuring out who had the most knowledge or interest in creating a product,” Stevenson said.

Dr. Patrick Dowd, chief technology officer and chief architect at the National Security Agency, discussed innovation in organizations. Then, Francis deSouza, president of products and services at Symantec, talked about the future of cyberthreats.

During that talk, each of the CIOs discussed how industry can best work with them.

“We’re struggling to find efficiencies,” East said. “We have to use what little funding we have to do the best we can as parts of the department are relying on technology to help them become more efficient. We need vendors that can help us find efficiencies or we’re not interested in talking with them.”

Acting GSA Administrator Dan Tangherlini discussed the future of the government and how agencies need to change how they operate to stay current with the times. Hadi Partovi, founder of Code.org, then discussed the need for computer code to be taught and learned as that will be the language of the future.

During the talk, Romine provided an update on the cybersecurity framework his office is developing as part of President Barack Obama’s cybersecurity executive order.

“We’ve gotten an awesome response from industry,” Romine said. “We are going to host two more workshops and after the next one – which will be held soon in the middle of the country – [we] hope to have a first draft we can share for comment.”

Two industry leaders then took the stage: Deloitte Consulting’s Mark White, who discussed how to put technology to business use, and CA Technologies’ John Borghard, who talked about disruptive trends in IT.

Defense Department Teri Takai spoke on her challenges and opportunities with DOD, saying at one point she had “the best vendors in the world” working for her.

“There is a linkage between what’s going on in government and how we create jobs, and it really comes from innovation,” Felice said.

U.S. CIO Steven VanRoekel closed the presentation part of the event by talking about the White House’s initiatives in big data.