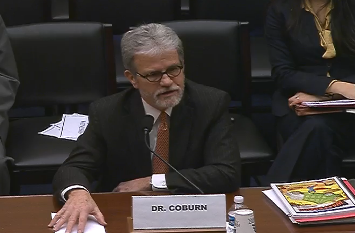 A senator testifying before Congress today blamed his colleagues on both sides of the aisle for not doing enough to tackle wasteful spending in government, saying not even the massive, sweeping budget cuts had forced them into action.

“The problem is that we don’t act on the problem. … The problem is us. Sequestration couldn’t even even force Congress to cut, eliminate or consolidate hundreds of duplicative, outdated programs. The problem is us,” Sen. Tom Coburn, R-Okla., told the House Committee on Oversight and Government Reform on Jan. 9.

Coburn and his Senate colleague Tom Carper, D-Del., testified alongside representatives from watchdog groups on how to take a bipartisan approach to tackle the challenge and root out wasteful spending.

Waste has long been a pervasive problem in government, spanning across numerous areas including improper payments, which Carper said have reach more than $100 billion annually during the past few years. These erroneous payments come from more than 70 programs at more than 20 agencies.

Coburn, whose 2013 “Wastebook” highlighted the government’s top 100 wasteful spending decisions totaling $30 billion, spoke on how few pieces of legislation have been passed to curb waste.

During the past four years, only one bill — the SKILLS Act, aimed at reforming federal workforce development programs — came out of the House to address one of the wasteful, duplicative efforts the Government Accountability Office had identified, Coburn said.

“That’s the only thing that has happened — in four years,” Coburn said.

Waste occurs when there is a lack of oversight or consequences, he said. The Defense Department, for example, hasn’t had a clean audit — ever. In 1995, GAO identified DOD’s financial management as at high risk of waste, fraud and abuse, and the Pentagon’s first goal was to pass a financial audit by 1997. The audit deadlines moved up several times, and three years ago, a law mandated the Pentagon to have its books in order by 2017.

But Coburn didn’t appear optimistic DOD would step up to the challenge.

Despite years and years of numerous GAO reports shining a spotlight on squandered taxpayer dollars, little has been done to address the problem, Coburn said.

“Most people don’t realize we have 679 renewable energy programs from 23 different agencies, costing $15 billion,” he said. “Can anyone logically explain why we would need 679 programs for renewable energy? Nobody can.”

The senator acknowledged tackling waste is a tough challenge because it requires winning over the committee with the jurisdiction and asking it to have perform oversight on at-risk projects and taking the step to consolidate duplicative programs.

And if that doesn’t work, “you have to embarrass members of Congress into doing their job,” he concluded.