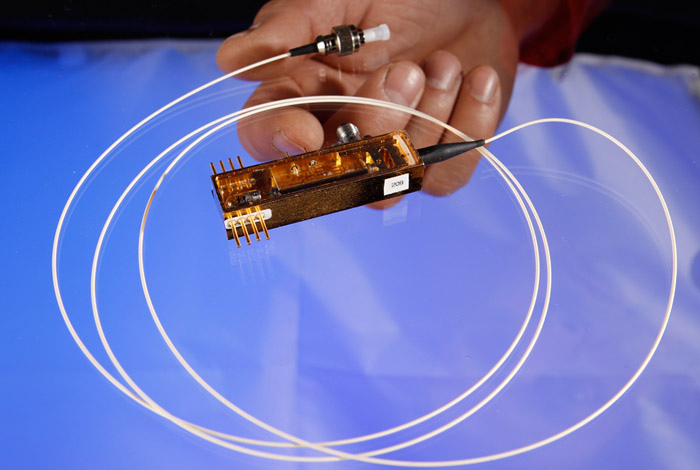 This small device developed at Los Alamos National Laboratory uses the truly random spin of light particles as defined by laws of quantum mechanics to generate a random number for use in a cryptographic key that can be used to securely transmit information between two parties. Quantum key distribution represents a foolproof cryptography method that may now become available to the general public, thanks to a licensing agreement between Los Alamos and Whitewood Encryption Systems, LLC. Los Alamos scientists developed their particular method for quantum cryptography after two decades of rigorous testing inside of the nation’s premier national security science laboratory. (Courtesy of Los Alamos National Laboratory)

Los Alamos has developed a way to encrypt data by using the random spin of photons — single light particles — to create cryptographic keys. Since this behavior is based on the way photons move on an atomic level (a study known as quantum mechanics), the cryptologic key produced by the system is impossible to break.

This represents a vast improvement over current cryptological systems, which all rely on mathematical functions.

Scientists at Los Alamos have built this system into USB flash drive-sized transceivers like the one pictured above, which would be connected to end points, such as secure laptops or ATMs. Getting those practical applications to the public will be up to Boston-based Whitewood Encryption Systems Inc., a subsidiary of science and tech development firm AlliedMinds, which acquired the technology through an exclusive licensing agreement with the laboratory. The terms of the deal have not been released.

John Serafini, vice president of AlliedMinds, said the company acquired the technology after finding it through the Department of Homeland Security’s Technology Transfer Program, which works as an intermediary between private industry and federal agencies.

The company plans to roll out a quantum random number generator using the licensed technology some time in the second or third quarter of 2015 with the idea of adding products to it that are already running transport layer security (TLS) or secure sockets layer (SSL) encryption. Serafini said a quantum key management system, which would control the entire life cycle from creating to storing to retiring cryptologic keys, will eventually compete with other established forms of cryptography like RSA or elliptical curve.

“What we are developing here is very revolutionary and disruptive,” Serafini said. “We’re bringing not only a very high level of security to gated communications, but we’re doing it at exceptionally fast speeds and reducing, almost to nothing, the amount of latency in the system of encryption due to the key management system. That’s really exciting because big data requirements are only going to scale exponentially and the ability to accurately and faithfully encrypt information in a cloud environment, that’s really interesting to be able to secure it and do it fast. We’re really excited about that combination.”

The lack of latency is something Newell also touted, pointing to uses such as financial systems or the next generation of America’s electrical grid that cannot afford to wait for systems to work through security measures.

“We also see a tremendous need for systems like this where cryptography needs to have very low latency,” Newell said. “In conventional cryptography, because it relies on mathematical problems, there’s often some time required simply to compute the mathematical functions. You can’t tolerate that much delay in the information. Because our system uses physics to provide security, the latency is much, much less and the delay introduced by cryptography is much, much less. So we see applications in situations where information must be sent with very high security and with very little delay.”

“Quantum systems represent the best hope for truly secure data encryption because they store or transmit information in ways that are unbreakable by conventional cryptographic methods,” said Duncan McBranch, chief technology officer at Los Alamos National Laboratory, in a release. “This licensing agreement with Whitewood Encryption Systems is historic in that it takes our groundbreaking technical work that was developed over two decades into commercial encryption applications.”