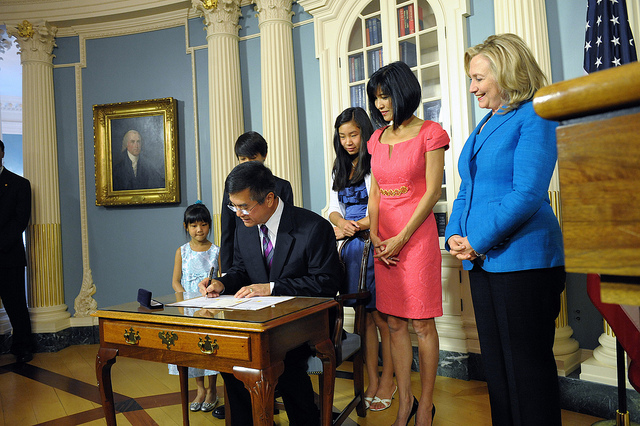 Gary Locke officially resigned as Commerce Secretary yesterday to become the nation’s ambassador to China in a move that has been planned now for months.

“It has been the honor of a lifetime serving as Commerce Secretary for President Obama. I’m proud of the men and women with whom I had the privilege to work and the tremendous accomplishments we’ve made together in the last 28 months,” Locke said.

“From increasing U.S. exports and reducing patent application wait times, to creating the foundation for a national smart grid and taking an important first step to reform the export control system, we have helped create jobs, lay the foundation for future economic growth and made American companies more innovative at home and more competitive abroad. And we did all of this while making the Commerce Department more efficient and responsive to its stakeholders,” Locke noted, according to the Department of Commerce.

According to the agency, under Locke’s leadership, the Commerce Department also reduced the average time needed to award a competitive economic development grant from 140 days to 20 days; streamlined Department business services through the Commerce Connect one-stop shop initiative; efficiently distributed nearly $5 billion in Recovery Act funds for broadband development in under 18 months, which helped create more than 120,000 miles of broadband infrastructure; and, oversaw a significant first step in the President’s export control reform effort.