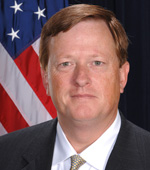 Editor’s note: Story has been updated with a statement from DHS public affairs.

Luke McCormack has been appointed chief information officer at the Department of Homeland Security, a DHS spokesperson confirmed Oct. 25 to FedScoop.

“The Department of Homeland Security is proud to announce Luke J. McCormack will join the agency as its chief information officer in the coming weeks,” said a statement from the DHS public affairs office

According to the announcement, McCormack will be tasked with managing and directing information management support processes. In addition, he will work to push efficiency through data center consolidation, cloud-computing expansion and decreasing cyber-threats to DHS networks.

McCormack, who’s replacing Richard Spires who stepped down in May, has spent more than 20 years in government. Since March 2012, he has served as deputy assistant attorney general for information resources management and CIO at the Justice Department.

Before joining DOJ, McCormack served as CIO at Immigration and Customs Enforcement since 2005.

While at ICE, he leveraged his management experience in the federal government to revamp the CIO organization to better meet the needs and priorities of the ICE mission.

McCormack has also worked in the private sector with MCI, Ford Aerospace and other smaller firms.

McCormack brings a depth of experience in strategic and information resource management, including a background at DHS having served as the CIO for the Immigration and Customs Enforcement directorate as well as Customs and Border Protection’s acting director of the Infrastructure Services Division.

As Chief Information Officer, McCormack will be responsible for managing and directing information management support processes—combining the functions of information technology and telecommunications to provide coordinated support strategies for meeting DHS-mission related information needs.  He will also be involved in driving efficiency through data center consolidation, cloud computing expansion, and reducing cyber threats to DHS networks.

McCormack has been nominated this year for the FedScoop 50 Federal Leadership Award.

by Dave Nyczepir • 4 seconds ago
Modernization