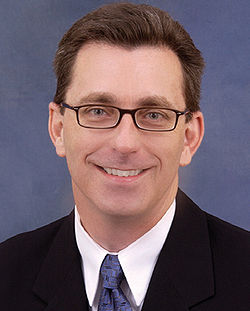 National Archives CIO Michael Wash’s daily challenge is to keep the history of the United States in order by making information easily available.

On National Archives CIO Michael Wash’s desk, there are two cameras. One is a 100-year-old Autographic Brownie, which was the first camera of its time to have a window for photographers to write metadata on the film.

“I keep this because this is metadata,” Wash said. “One hundred years ago, someone realized that metadata was needed to add additional richness to an experience.”

The second camera is from Kodak, his former employer, and it holds film patented by Wash. The film automatically captured metadata, like if the flash went off during the picture, by using magnetic heads in the camera to record the data.

Almost 100 years after the first film metadata, Wash was able to marry something old with the new and innovative.

Wash’s daily challenge at the Archives is to keep the history of the United States in order by making it available online to researchers, organizing it, digitizing it and making it retrievable, all while making room for innovation.

“Think of [my job] as two tracks: Operational tasks, like making sure email is working properly, are the strategy of what needs to be done, and the innovation, how do we do things better,” Wash said.

Wash must walk a thin tightrope, balancing between the two.

“The way that my mind works is I need to find people that are really good at operations,” he said. “My core ability is the strategy and innovation and looking into the future to find ways of doing things most effectively.”

In an agency that has more than 4.5 million cubic feet of documents, takes in 300 terabytes of data purely from the 2010 national census and leads the $300 million Electronic Records Archive, Wash’s challenges lie not only in handling the data of the present, but innovating to prepare for the data of the future.

“[Wash] is the most innovative person I’ve ever had the privilege to work with,” said Scott Stovall, director of the Electronic Records Archive. “He doesn’t see challenges or problems; he sees opportunity.”

Wash cut his teeth in government at the Government Printing Office at a time when the agency wanted its publications online for easy access.

“The funny part of the story I tell is the public printer was looking for someone crazy enough to take on transformational challenges,” Wash said.

After taking the job at the Archives in 2011, Wash has a whole new transformational challenge.

The Archives has a tremendous amount of analog data, but researchers of the 21st century widely expect their data presented online where it is easily searchable. Meaning, analog files that come in from agencies, the White House and Congress need to be digitized or the ones that are digitized need to be handled properly.

“How do we manage a large amount of electronic data that needs to be processed when it’s exploding at a rate the is unbelievable?” Wash said. “The International Data Corporation extrapolates that the growth of digital data is growing at a rate of 32 percent per year, compounded.”

Needless to say, it takes a lot of work to figure out how to keep all that data.

Cost of storage has been declining 40 percent a year for the last 20 or 30 years, according to Wash. “But there is going to be a point where it can’t drop any further,” he said.

Which is why Wash doesn’t want the Archives to buy another server. Not even one, because they get old and have to be replaced every few years.

Instead, he wants to contract storage on an as-needed basis. He wants the entire IT infrastructure at the agency to be a network, where people can plug in and have secure access to their applications and data, whenever and wherever they want.

Even if that happens, Wash can’t rest on his laurels. If a company goes out of business, the data may be lost, which is why he lives by the words of Andy Grove, former CEO of Intel Corporation, “Only the paranoid survive.”

“We cannot rest assured that the companies we are working with today will be in existence five years from now,” Wash said. “Who would have projected 40 years ago that Kodak would go bankrupt and exit the photo business? No one would have done that.”

Wash says he’ll make sure agreements are in place so the storage company will return the data to the Archives if that happens.

More to the point of being paranoid, Wash says the agency needs to accept the fact that the size of its database is going to grow to the point where it’s going to be unmanageable, so he must begin worrying about it now.

Another one of Wash’s goals is to optimize the portfolios and information systems that manage data and make it findable.

“Even if we can save all [that data], how are we going to find it?” Wash said.

Wash’s agency isn’t like the Defense Department, with an outstanding budget. While data intake grows 32 percent a year compounded, his staff stays largely the same. There is more data to organize with fewer resources to do it.

Innovation is the best way to tackle that problem, and innovating is in Wash’s blood. Trained as an electrical engineer, Wash has always had a penchant for figuring out things.

“I don’t know when it started,” Wash said. “It was definitely early, maybe when used to take my dad’s watch apart and couldn’t put it back together and he’d get angry. But I wanted to see how it worked.”

Now, he is putting back together U.S. history, one bit and byte at a time.