If we had to name one place where an open and trusted computing platform was most needed, it would be inside government. As part of that, the Obama administration last year signed an executive order requiring government information be open and machine readable. However, it also needs to be secure, because some information needs to be kept secret regardless of platform. That’s where efforts like the IRS 1075 regulatory standards come into play, requiring security for tax documents.

On the front lines of both of these efforts is a company that probably doesn’t come to mind in the open source movement, especially in government. Although it has not until very recently begun taking credit for its efforts, Microsoft is quickly emerging as a major leader for open source.

I tracked down two people at Microsoft to help expose and explain their open source efforts. I talked with Kent Cunningham, chief technology officer for federal, civilian and health care, and Michael Donlan, vice president of U.S. state and local government. Both explained how important open source is to Microsoft and how they are helping government agencies to create a robust, yet secure, open source environment. Some of their answers to my questions were pretty surprising.

John Breeden II: Can you tell us when open source became a priority for Microsoft and some of the milestones you have had in this area? 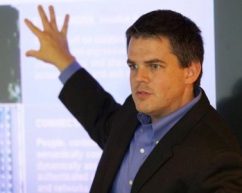 Kent Cunningham: Over the past decade, Microsoft has truly become a company that embraces open source and has been involved in multiple open source efforts. More and more, customers, partners and the industry understand that the work we are doing with open source is about helping customers and enabling a rich and robust ecosystem of developers and partners. We enable open source on our platforms and encourage open source developers to continue to think of Windows and Windows Phone as platforms for them to develop on.

For example, Microsoft manages codeplex, which hosts tens of thousands of open source projects, many of which were created by Microsoft employees. Microsoft Open Technologies, a fully owned subsidiary, contributes to and partners with open source communities and promotes interoperability. The .Net Foundation, announced at [Microsoft’s] 2014 Build Conference, fosters open development and has several high-impact projects like ASP.NET vNext, [which is the] .NET compiler platform. Microsoft’s support for open source software (OSS) is all the more evident in the cloud: Microsoft Azure is an open and flexible platform, and supports a large and growing number of open source applications, frameworks and languages.

JBII: But what are the advantages of open source software for those who use it? And does making software open source make it more challenging for Microsoft as opposed to creating a proprietary platform, or is it just different?

KC: The real advantage to leveraging open source comes from the ability to reuse code and knowledge that has been created and tested previously, versus recreating the wheel for every application. While we have to acknowledge that the total cost of deploying and operating an application involves choosing the right platform models for availability, security, scale, interoperability, excreta, it certainly makes sense to work to reduce unnecessary overhead and lower time-to-value when OSS allows this opportunity. We do this ourselves at Microsoft and our customers are taking this on as a best practice, along with agile development principles with adaptive planning for continuous improvement.

As for delivering code via the open source communities versus using a commercialized intellectual property method, these are simply complementary business models, and not necessarily competing solutions. I think many people haven’t quite recognized this, and the legacy mentality of mutual exclusion therefore persists. At Microsoft, we are in the software business across devices, platforms, clouds, operating systems, and a wide variety of business models. This includes embracing and empowering the OSS communities to thrive and grow while leveraging the developer tools, platforms and operating systems that best fit their needs.

GSA improving how it...