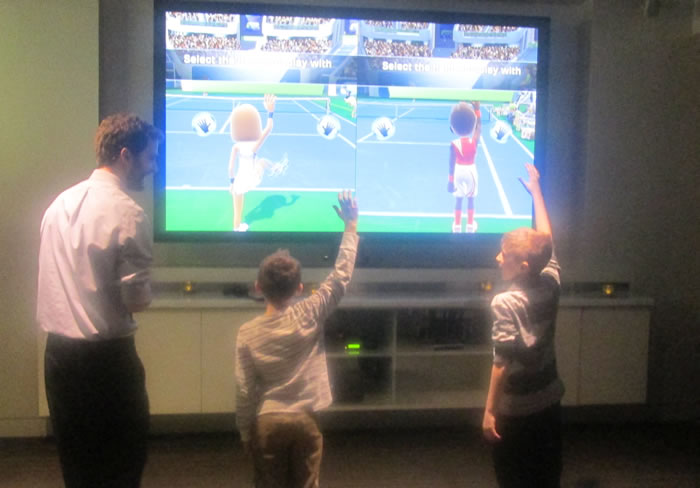 December can be one giant happy hour for Washington professionals. In the bar line at Microsoft’s Holiday Open House, held Wednesday at the tech giant’s K Street office, guests compared stats for the week’s rotation.

“This is my fifth holiday party since Monday,” said one business man. Besting him, his buddy claimed he was at his third stop … of the night.

No matter how good a caterer may be or how fun a signature drink name may sound, it’s hard to court busy Washingtonians to celebrate during the holiday season, a time most people reserve for family and close friends. That’s why, through the years, Microsoft has made its annual party family-friendly.

Mingling in the crowd of suits and heels were plenty of sweatshirts and sneaker-clad children. Last year, kids could Skype with Santa. This year, on super-sized screens, younger guests played video games alongside moms and dads.

Welcoming children at a corporate affair is a gesture the parents on Microsoft’s guest list appreciate just as much as an open bar.

“It’s a great concept,” says guest Denee Barr, a D.C.-based multimedia producer and a mom. “Not only do the children get to play with all the fun gadgets and games that are on their Christmas list, but they get to see another side of their parents’ jobs.”

The boys and girls who traded homework for Xbox last night aren’t the only lucky kids in Washington. Microsoft asked party goers to bring an unwrapped toy to give to Toys for Tots. Footballs, trucks and games decorated the party’s entry way, the pile growing larger through the night.

Despite a younger crowd, the affair remained sophisticated. Holiday carolers greeted guests at the door, who munched on duck taquitoes, Caesar salad cones and gingerbread cookies. And, as the evening wound down, the most festive celebrants found themselves facing that burning party question.

“Time for one last drink?” asks a young man, raising his glass.

“Sure,” allows his mother as her son heads to the bar – a hot chocolate one – to end the night with a double shot of marshmallows.