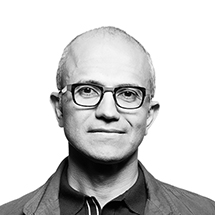 Five months after Microsoft CEO Steve Ballmer announced he would be retiring, a new CEO has been named.

Satya Nadella has worked at Microsoft for 22 years, and will be Microsoft’s third CEO in 39 years. Co-founder Bill Gates is also stepping down as chairman and will be advising Nadella on technology.

“While we have seen great success, we are hungry to do more,” Nadella said in an email to employees. “Our industry does not respect tradition — it only respects innovation. This is a critical time for the industry and for Microsoft. Make no mistake, we are headed for greater places — as technology evolves and we evolve with and ahead of it.”

Much of Nadella’s work at Microsoft has been in Internet-based and cloud computing services, and he said he expects cloud, big data and improved computing capacities will continue to shape how Microsoft does business.

“I believe over the next decade computing will become even more ubiquitous and intelligence will become ambient,” Nadella said. “The co-evolution of software and new hardware form factors will intermediate and digitize — many of the things we do and experience in business, life and our world.”

John Thompson will be replacing Gates as Microsoft’s new chairman.