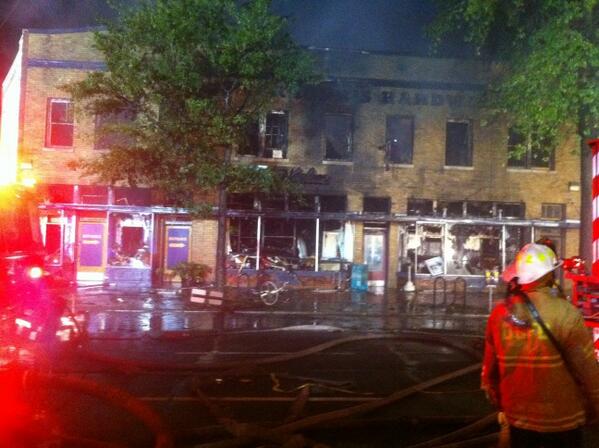 Most everyone who has ever lived or worked on Capitol Hill has bought something for their house — a spare key, table and linen rentals for a party, or a Christmas tree — from Frager’s Hardware. That is why when the historic business caught fire Wednesday night so many people felt like they had lost a little bit of home.

In recent years, the Capitol Hill community has watched many of its landmarks such as Eastern Market, Capitol Lounge and Tune Inn go up in flames. Time and again, neighbors have rallied to bring back these locally owned businesses. So as the news and the smoke spread last night about the Hill’s favorite old-fashioned showroom, it was the modern tool of social media customers used to offer their services to the workers and owners of this Washington institution.

Hours after the Frager’s fire began, a Give Forward fundraiser page went live and, over the next three weeks, will work toward a $100,000 goal. Until Frager’s opens again, Barracks Row neighbor Matchbox is offering temporary work to Frager’s employees. Hundreds of memories, well-wishes and prayers are still being shared on Facebook and Twitter, from Southeast D.C. and around the country.

“Frager’s friends, our hearts go out to you,” tweeted Eastern Market DC. “We are here for you like you were there for us in 2007.”

A peek at the Frager’s Hardware Twitter page gives a virtual glimpse into the character of a business that since 1920 has been far more than just a depot for Capitol Hill homeowners. Posts made days before Wednesday night’s devastating fire tell of donation efforts for Oklahoma tornado victims and a plea for a bike stolen outside the store to be returned.

And even as the blaze was being contained last night, it was — as it’s been the case for more than 90 years — its patrons for whom Frager’s was most concerned: “Stay with us as we work this out,” reads Frager’s Web page today about the fire to a town that continues to answer, “We aren’t going anywhere.”