NASA fared better in the third round of scoring on implementing the Federal IT Acquisition Reform Act, released Tuesday, while the Transportation Department dropped to a failing grade.

“We are seeing progress but it’s definitely not enough,” said Rep. Will Hurd, R-Texas, chairman of House Oversight’s IT Subcommittee, in an interview with FedScoop. In particular he noted an overall lack of progress in closing data centers, and going to the cloud.

“We’re still seeing times where new data centers pop up,” he said. “We’re still hearing of situations in which folks involved in the digital infrastructure, or protecting it, think that going into the cloud introduces security concerns rather than alleviating security concerns.”

The Transportation Department, which dropped from a “D” to an “F+,” is the only agency to fall in its scoring and the only failing grade in this round.

“Richard McKinney at DOT is one of the best CIOs that we have. But he has a situation there at the Department of Transportation that’s very difficult that he inherited, but it’s not from his efforts,” said David Powner, director of IT Management Issues at the Government Accountability Office, at the hearing. “And even though he has an ‘F’ he deserves a lot of credit for what he’s done.”

The scorecards, Hurd noted, are important “to get into the rhythm of holding our agencies accountable to making sure they’re modernizing their infrastructures, their digital infrastructure.”

“And it’s also a process for us to make sure we’re looking at the right metrics that drive outcomes,” he said.

The overall grades are derived from scores in four areas:

“Since our last hearing in May, I am encouraged by how quickly the administration and the majority of federal agencies have embraced this effort,” Rep. Gerry Connolly, D-Va., said in prepared remarks provided to FedScoop in advance of the hearing.

Connolly co-authored the FITARA legislation with Rep. Darrell Issa, R-Calif. Connolly’s remarks for the hearing also note the committee has received “favorable feedback from the agency CIOs on the components of the scorecard,” but noted that “there is always room to improve the metrics.”

“The enormous amount of feedback we have received thus far from our stakeholders is proof agencies are taking FITARA implementation seriously,” he said in his remarks.

This third round of grading is also well-timed, Hurd noted, to align with the transition.

“Now is a good time too. As we talk about an incoming administration and transitions, that when new people are coming in, making sure they’re aware of some of these problems and nip them in the bud on day one,” Hurd said.

The agencies who received the highest score to date of a “B+” were the Commerce, Interior and Veterans Affairs departments, the Environmental Protection Agency, the General Services Administration and the Social Security Administration.

Connolly’s remarks in particular took issue with “a lack of perceived support for FITARA implementation many CIOs have experienced with their agency leadership.”

“I find it unacceptable for any of the agencies to be working against the intent of FITARA,” he said. “Secretaries ignoring the critical role of CIOs in FITARA implementation and in directing IT investment defeats the purpose of the legislation. We have found that some agencies are struggling to elevate the CIO position to its appropriate management level.”

Hurd said to FedScoop that the committee has learned of “problems between CIOs and CFOs.”

“The CFOs in some agencies feel like some of their authority is being taken away from them. And the reality is in those situations it’s the agency heads that need to be getting involved and making sure that the CIOs have the authority that has been given to them by Congress,” he said. “Because ultimately if we’re going to hold the CIO responsible for protecting digital infrastructure … then we need to be able to hold them accountable, and they need to have the authority to be able to do that.”

There have been reports of CIOs being unhappy with the scorecard metrics. But Hurd said that means the act is working.

“That means that this is working, is when you have people complaining about the scores,” Hurd said, noting that all information is self-reported. “And yes, it is pressure on the CIOs in order to perform. Because when you talk about a $90 billion environment and some of these problems that we’ve seen have existed for years, then they should feel the heat, and they should feel pressure to get their systems to a point of basic, good digital system hygiene.”

See all of the grades in a graphic from the Oversight and Government Reform Committee below.

This story has been updated to include comments from Rep. Hurd, testimony from the hearing Tuesday and to reflect that the plus and minus additions to the scorecard are based on reporting authorities. 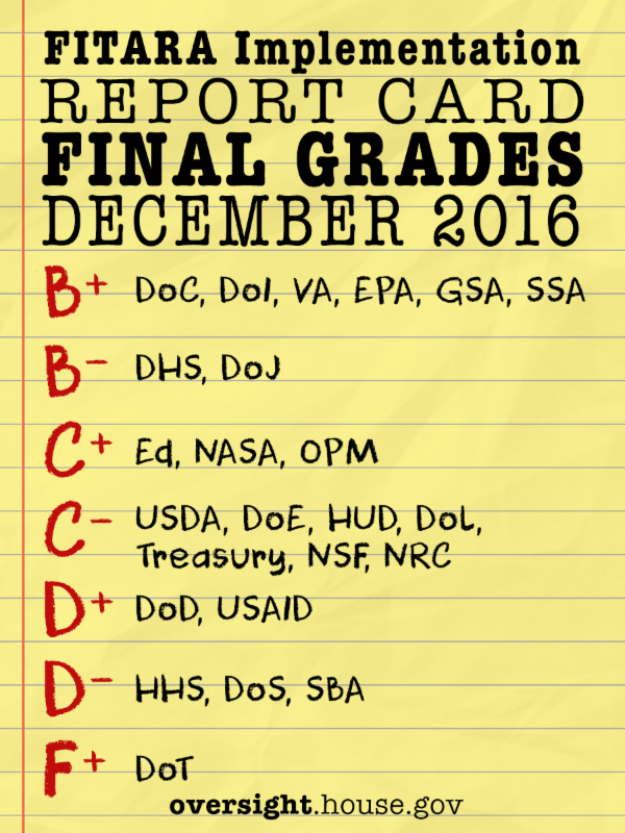