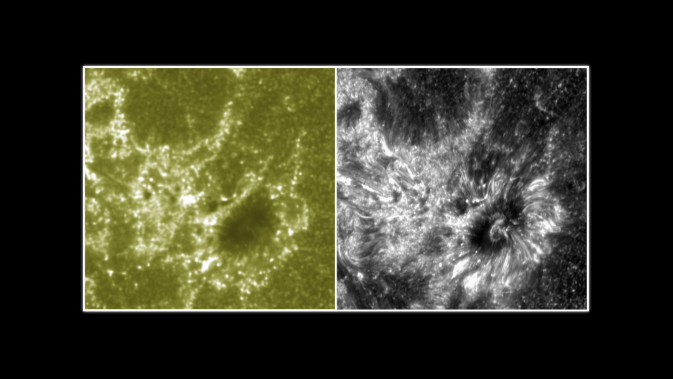 Images of the sun’s interface region taken by IRIS.

Our planet’s sun allows life to thrive here. It warms us, it lights our days (and our nights indirectly. Sometimes.). So, finding out more about it only lets us find out more about life here. NASA’s Interface Region Imaging Spectrograph was launched to do just that. As reported on NASA’s official blog, as soon as IRIS opened its eyes July 25, 2013, it was able to take highly detailed photos of the sun’s surface like no one had witnessed before.

You might think an average distance of 93-odd million miles is a long way to go to take some pictures. But these images can teach us so much about our nearest star, something we know embarrassingly little about given its close (on a cosmic scale, at least) proximity. Apparently, the scientists involved with this project agree.

“These beautiful images from IRIS are going to help us understand how the sun’s lower atmosphere might power a host of events around the sun,” said Adrian Daw, the mission scientist for IRIS at NASA’s Goddard Space Flight Center in Greenbelt, Md. “Anytime you look at something in more detail than has ever been seen before, it opens up new doors to understanding. There’s always that potential element of surprise.”

As the name suggests, IRIS looks at the interface region of the sun, which is also called the chromosphere. Each photo is extremely detailed, looking at an area of the sun only 150 miles wide, which is really precise considering how far away the satellite has to be. Also, as the name suggests, in addition to the camera the IRIS also has a spectrograph. By measuring how much of each particular wavelength of light the IRIS receives, which provide velocity, temperature and density, key information when trying to track how energy and heat moves through the region.

The IRIS mission has long-term implications for understanding the genesis of space weather near Earth. Understanding how energy and solar material move through the interface region could help scientists improve forecasts for the kinds of events that can disrupt Earth technologies. And that is definitely a good thing.