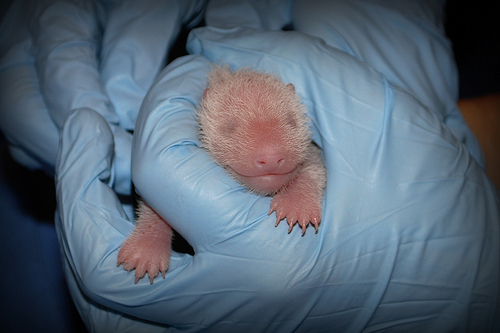 When the National Zoo hosts a gender reveal party for its newborn panda, there are no boxes of pink or blue balloons to release, no cutting of a cake to show yellow or green icing. Instead, it’s all science… and just a little Jerry Springer.

The zoo revealed today the cub, born Aug. 24 to mom, Mei Xiang, is a girl. DNA tests confirm Tian Tian is her father.

Zoo scientists had to test for both sex and paternity because Mei Xiang was artificially inseminated with the sperm of  Tian Tian and Gao Gao.

“We had never artificially inseminated Mei Xiang with semen from two males before this past breeding season,” said Pierre Comizzoli, reproductive biologist at the Smithsonian Conservation Biology Institute. “If Gao Gao had been the father of one or both cubs, that would have been very interesting because we would have known that the second artificial insemination was the one that was successful.”

The new panda, which will remain unnamed for several more months, had a fraternal twin sister. The stillborn cub Mei Xiang delivered was also a girl, and also fathered by Tian Tian.

The cub has yet to make a public debut, but you can steal a peak at the pandas on the zoo’s popular Giant Panda Cam.