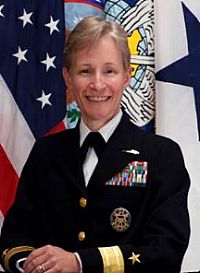 Webber currently serves as director, communications and networks, N2/N6F1, Office of the Chief of Naval Operations.

Other tours include assignments as officer in charge at both Surface Ship Anti Submarine Warfare Analysis Center, San Diego and Communications Security Material Issuing Office, San Diego. Webber was then assigned as the Navy’s enlisted advancement planner for the Enlisted Plans and Community Management Branch in the Bureau of Naval Personnel and served as executive officer, Naval Computer and Telecommunications Station, Washington. She has been the director of Operations and Readiness at commander, Naval Computer and Telecommunications Command as well as the operations officer and director, Global Network Operations and Space Center at Naval Network and Space Operations Command, Dahlgren. She was also executive assistant to the deputy chief of naval operations for Communication Networks (N6) at OPNAV.

Webber holds a Master of Arts in Management from the University of Redlands (California) and a Master of Military Science from the USMC Command and Staff College. She is a recipient of the Naval Historical Center’s Admiral Samuel E. Morison Supplemental Scholarship and has completed her doctoral coursework in International Relations at Catholic University. She holds certificates in Chief Information Officer and Information Assurance from Information Resource Management College at National Defense University and Information Operations from Naval Postgraduate School.