The first African American woman to command a ship in the U.S. Navy made history again Tuesday when she became the first woman promoted to Admiral in the service’s 239-year history.

The Navy appointed Vice Adm. Michelle Howard to be the next Vice Chief of Naval Operations, pinning a fourth star on her shoulder and making her the second senior-most officer in the Navy, during a ceremony at Arlington National Cemetery.

“This is an historic day,” Navy Secretary Ray Mabus said. As a father of three daughters, Mabus said, “I refuse to believe there are any ceilings for them, glass or otherwise. The Navy picked the best officer to be the VCNO. There should be no barriers. We are removing the last ones of those.” 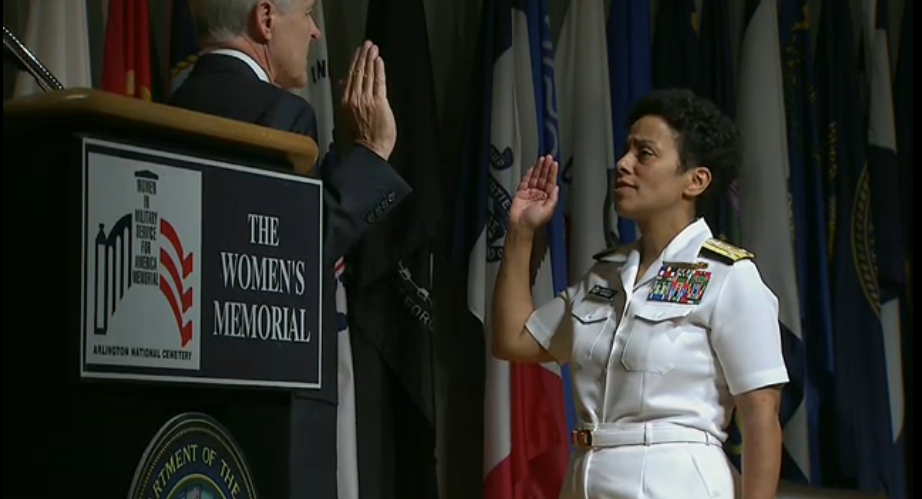 Howard is a 1982 graduate of the U.S. Naval Academy and was one of the first women to graduate from the school. By 1999, she took command of USS Rushmore (LSD 47), becoming the first African American woman in the Navy to do so. In 2009, she commanded Task Force 151, the multinational counter-piracy effort made famous during the rescue of Maersk Alabama Captain Richard Phillips, who had been taken hostage by Somali pirates in the Gulf of Aden.

“Her accomplishment is a direct example of a Navy that now, more than ever, reflects the nation it serves — a nation where success is not borne of race, gender or religion, but of skill and ability,” Mabus said.

Chief of Naval Operations Adm. Jonathan Greenert called Howard’s “trailblazing accomplishments” evidence that she is the right officer for the job of VCNO.

“Michelle’s many trailblazing accomplishments in her 32 years of naval service are evidence of both her fortitude and commitment to excellence and integrity,” Greenert said. “I look forward to many great things to come from the Navy’s newest four-star Admiral.”

Howard may have been ready to break the last remaining glass ceiling in the Navy, but the institutional Navy was a little slower to respond.

“When I called to order four-star shoulder boards for women, they didn’t exist,” she said during remarks at her promotion ceremony.

Howard, who currently serves as the Deputy CNO for Operations, Plans, and Strategy, will relieve Adm. Mark Ferguson III as the 38th VCNO. Follow @DanielVerton