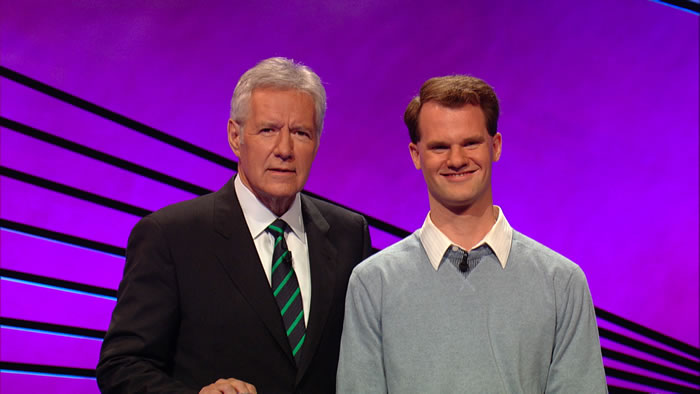 NRL post-doc, Keith Whitener, with JEOPARDY! host, Alex Trebek. Keith was a seven-time champ on the television quiz show that tests a person’s knowledge in a wide range of subject areas.
(Photo: JEOPARDY!)

Keith Whitener, a scientist at the Naval Research Lab, recently finished a run on Jeopardy where he become one of the show’s all-time biggest winners.

Whitener won seven games, taking home $147,597 in prize money, ranking him as the 14th all-time regular season money winner on the show. He also qualified for the annual Tournament of Champions where he can win another $250,000 in prize money.

The NRL did a Q&A with Whitener on his experience.

How did you prepare for the show?

I play Sporcle quizzes online a lot as sort of a time-killer. I also do crossword puzzles pretty frequently. For specific preparation, I tried to focus on my weakest areas: sports history, Broadway musicals, etc. I really just tried to relax. I figured JEOPARDY! isn’t something you can just cram for, and it probably would’ve done more harm than good if I had tried to memorize a whole bunch of facts that didn’t interest me.

Science was the easiest category. As scientists, we often take for granted the very basic level of knowledge probed in JEOPARDY! science clues. Most JEOPARDY! contestants don’t have a background in science, so the science category is a good way to score a lot of points quickly. The hardest categories were the ones that dealt with topics from 1960 to 1980. I’m too young to remember the events from this period directly, but I’m too old for this period to have been taught in history class. Whatever knowledge I have is simply by virtue of having picked it up randomly along the way.

Were there any surprises for you when you actually got to the time for taping the program?

I was surprised by how quickly it all went. Trebek and the entire cast and crew are really amazing at what they do, and the taping hums along pretty seamlessly for the most part. If you’re in the audience, it’s pretty difficult to tell much of a difference from watching it on TV.

What kind of research do you do at NRL?

I conduct research on the chemistry of surfaces, specifically graphene (atomically thin sheets of carbon) and other carbon species. I’m doing a lot of wet chemistry lately (beakers, flasks, etc.), which is a bit of a stretch for me, since my background is more on the physics side of chemistry than the preparative side. This research could lead to chemistry on surfaces that might offer more robust or more chemically flexible sensors. I’m learning a lot, and I really enjoy a lot of the projects I’m working on.