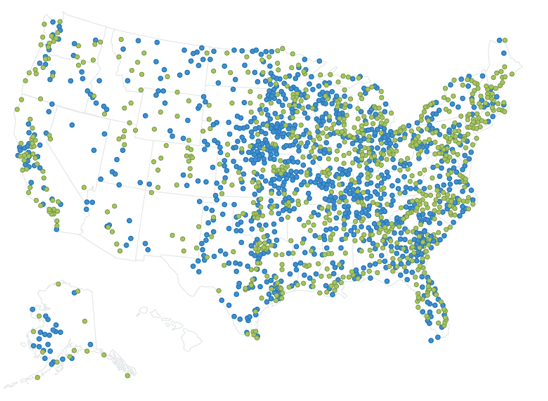 More than 1,600 airports across the country have deployed some form of the Next Generation Air Transportation System, called NextGen. Future deployments, however, could be limited by funding difficulties. (Source: FAA)

Despite almost a decade of work creating the Next Generation Air Transportation System, called NextGen, experts say the Federal Aviation Administration system designed to reduce air traffic wait times in the air and on the ground will not realize its full potential without a stable source of funding.

NextGen has seen partial deployments in more than 1,600 airports, but in order for a full launch, the FAA needs a more secure funding structure to ensure that the system is supported with an uninterrupted stream of funding.

“Money is the issue, but funding is the problem,” Paul Rinaldi, the president of the National Air Traffic Controllers Association, said. “Our [air traffic] facilities are running the safest, most efficient system in the world, but we have a funding problem. It’s broken.”

With another round of sequester cuts looming in October 2015, the difficulties of the March 2013 sequester and the October 2013 government shutdown made air traffic control generally difficult, Rinaldi said.

During the shutdown, air traffic controllers were considered essential employees and called into work without pay. Even though the shutdown only lasted a few weeks, the financial struggles set NextGen’s implementation and FAA operations back about nine months.

“Obviously morale takes a tremendous hit when you’re a controller and you’re told you’re essential, but you don’t get paid,” Rinaldi said. “We’re really concerned about the staffing of our facilities. It takes three to five years to certify a controller. If we do not stay on top of that, we will have problems.”

But the difficulties with the funding structure have prompted the FAA to do something else while implementation has been delayed – increase collaboration with industry.

“The FAA has taken a different approach as of late and has started working with industry,” said Matt Hampton, the Transportation Department’s assistant inspector general for aviation audits. “We’re kind of at a pivot point with NextGen. Today, I think we have a much firmer set of priorities.”

Captain Steve Dickson, the senior vice president of flight operations for Delta Airlines, said private industry has been building a new engagement model with the FAA and through the Radio Technical Commission for Aeronautics’ NextGen Advisory Committee.

“We’ve been working through the federal advisement committee process to develop after a task force in 2009 where more than 300 industry stakeholders came together over a seven month period,” Dickson said. “We followed that up with the stand up of the NextGen Advisory Committee.”

The conversation between Dickson, Hampton and Rinaldi, held Tuesday as a part of Airlines for America’s Aviation Policy Summit at the National Press Club, came on the heels of a keynote by Rep. Sam Graves, R-Mo., about an upcoming FAA Reauthorization and Modernization bill to amend and modify the 2012 version.

The bill, Graves said, will not come during this Congress, but it will be one of the first priorities for the House Transportation and Infrastructure Committee in the next Congress starting January 2015.

“Moving forward, we can’t do any concrete work, but behind the scenes the work is being done,” Graves said. “It’s a monumental task. We’ve got everything from those issues like NextGen, but we’ve also got a gazillion little tiny things to worry about like hangar use and lead-based fuel. There’s a thousand items out there, but the good news is we can get a lot of that worked out early and the rest of that is negotiated through committee work.”

Even if that happens successfully, there are still challenges to realizing the full promise of NextGen. Dickson said despite significant progress so far, the joint group of agencies working on NextGen has a lot more to do, especially in making a transition to a new system while airports and air traffic controllers are still using the current one.

“We’ve made a good bit of progress, but it’s mixed,” Dickson said. “Implementation is a difficult process. Transitions are always difficult, particularly when you look at the systems in the U.S. compared to anyone else in the world. It’s almost like trying to renovate a house while you’re still living in the house. You have to have a transition plan for what the house is going to look like.”

Although NextGen is a technology-heavy initiative that will bring smarter, global position system-enabled technologies and allow airports and air traffic controllers to more precisely track flights and keep them on more direct routes, Dickson said the most difficult part of implementation will be the process.

“It’s not so much about technology,” Dickson said. “It’s about how do we use these tools? How do we take all of that, put it together and improve performance in the system.”