During 2013, the Chicago Metroplex handled more than 4,000 flights per day. Under NextGen, that area would be able to handle even more. (Credit: FAA)

The Federal Aviation Administration’s plan for the Next Generation Air Transportation System, released Oct. 17, said funding for the program remains on track but warned that even minor changes resulting from another government shutdown or new requirements could delay the rollout even longer.

“Our ability to complete these commitments depends on maintaining an adequate and stable funding stream,” the plan states. “All parties must understand that the FAA’s agreement to assess a capability does not imply agreement to implement the capability, because the FAA must always make a credible business case to justify the full lifecycle costs.”

FAA Administrator Michael Huerta addressed the lack of uncertain funding during remarks at the Aero Club of Washington the day before the joint implementation plan was released and sent to Congress.

“We started a conversation last year about what kind of an airspace system we want and how we should pay for it,” Huerta said. “There’s a sense among some in the industry that it’s time for structural reform. That is because the FAA is facing two main problems. First, there is a lack of predictability in our budgets due to short term extensions and continuing resolutions, and because of the constrained fiscal climate here in Washington.”

Huerta called on the FAA and industry, through the NextGen Advisory Committee, to focus on the new plan’s four core priorities rather than on the “very diverse interests of all of our stakeholders.” The priorities, designed to cut down on wait time between flights taking off and landing, focus on optimizing airports with multiple runways, reconfiguring the navigation system from radar to GPS-based, increasing the efficiency of surface operations and improving communications between aircraft and the ground through digital communication systems.

“What we need to have is a conversation across the industry to identify the priorities for the system as a whole,” Huerta said. “The danger is that if we only promote certain narrow interests, we could devolve into trading one of our interests off against another, and our industry as a whole will be worse off.”

Huerta also echoed some of his earlier comments about how a fully-established NextGen system could have helped improve the air traffic control situation in Chicago after a fire at one of its facilities grounded flights nationwide at the end of September. Instead of saying that NextGen solely could have improved the transfer of authority during the incident, Huerta identified how the already-established parts of the system helped mitigate problems.

“The common theme in NextGen is that we are switching our nation’s air traffic system from point-to-point communications to a network of communications. One facility can communicate with all, and all can communicate with one,” Huerta said. “During this Chicago incident, we reconfigured our new en route automation modernization platform so that controllers in adjacent centers could see far beyond the boundaries of their own center and deeply into the airspace that was controlled by Chicago center.”

Less than two weeks after the incident, the Chicago-area airports were handling their normal volume of flights. The damaged facility reopened Oct. 13. 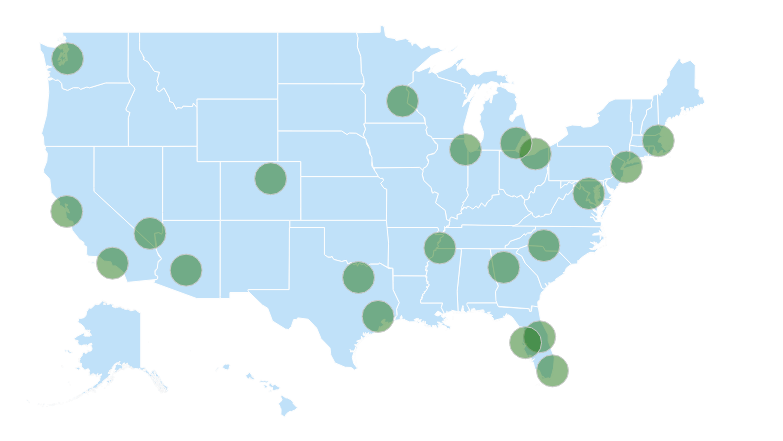 A map displaying the metroplexes that will be impacted by full NextGen deployment. (Credit: FAA)

Going forward, according to the new plan, the FAA will collaborate with industry to roll out parts of the four NextGen priorities to different metroplexes, or regionally grouped clusters of airports, over the next three years. Yet during his remarks, Huerta said the agency can’t put NextGen in place without making difficult decisions about how to keep the funding steady and achieve other agency goals.

“We need to have an honest conversation about the fiscal challenges we face,” Huerta said. “While you can always debate the exact budgetary needs of an agency, one thing is clear: There is simply no way the FAA can implement NextGen and recapitalize our aging infrastructure, and continue to provide our current level of services without making some serious trade-offs. Even with short-term choices, there will be significant impacts to our budget and the services we can provide. We need to have the flexibility to make investment choices that further the health of our airspace system and not make choices simply because they might be politically popular.”

“The joint plan issued today is a step in the right direction towards delivering long awaited NextGen capabilities to our aviation system and the traveling public,” LoBiondo said in a release. “As the FAA and industry move towards implementation of these NextGen capabilities, the House Aviation Subcommittee will continue to exercise its oversight role during this critical phase of transition.”

“When we heard from aviation stakeholders that they were not seeing immediate results from NextGen, we asked FAA to come up with this plan for quick implementation of these new technologies,” Larsen said in the release. “While these priorities may seem technical, their timely implementation will mean safer, faster travel for the flying public.”