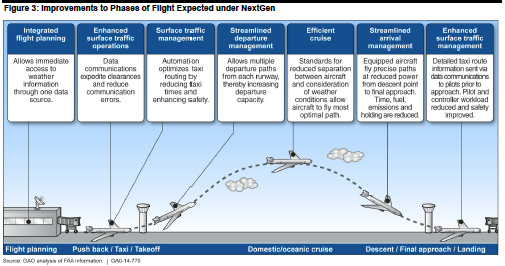 According to the Government Accountability Office, the FAA’s Next Generation Air Transportation System could make air traffic and air transportation more efficient in several different areas through the use of global positioning system technology.
Source: GAO

Aviation industry leaders are optimistic about the state of current U.S. air traffic control systems, but they are also concerned about the ability of the Federal Aviation Administration to put new, technology-driven systems in place.

The Next Generation Air Transportation System, which has been in development over the past decade, caused concern during an aviation policy event Tuesday due to the unstable funding environment the FAA faces stemming from sequestration and a reduced government budget.

But according to a recent report by the Government Accountability Office, the funding problem might not be the whole story – aviation experts are also concerned about the FAA’s ability to roll out NextGen on a wider scale.

Speaking Tuesday at an event sponsored by Airlines for America, Rep. Bill Shuster, R-Pa., who chairs the House Committee on Transportation and Infrastructure, echoed the GAO report’s findings.

“[We’re] still worried about NextGen and the FAA’s ability to see it through,” Shuster said. “[The GAO report] begs the question, ‘Is the FAA properly organized to finish NextGen?’”

The GAO’s results suggest it might not be — the agency surveyed 76 aviation industry representatives and fewer than 10 said they felt very confident the FAA could effectively handle NextGen’s rollout.

That’s not to say those surveyed don’t believe in the ability of the FAA in general. According to the report, most of the survey respondents said the FAA was moderately capable of operating an efficient air traffic control system.

During GAO’s interviews with FAA staff, the agency reportedly identified that the challenges industry executives see in NextGen are nothing new and the agency was working to overcome some of the obstacles.

“[FAA officials said] NextGen is now on track and the agency is starting to focus more on using these technologies to improve flight efficiencies and reduce flight time and fuel use, steps and a focus that should result in stakeholders realizing tangible benefits in the future,” the report said.

In response to industry’s uncertainty, Shuster suggested looking to other countries that have managed successful air traffic control reforms to see what examples the United States could follow and what strategies could be useful in the FAA reauthorization bill due next year.

“You look at France, Germany, Australia, New Zealand, Canada and other Western countries that have commercialized air traffic control service providers,” Shuster said. “What we can learn from other countries is very valuable to us. We don’t have to reinvent the wheel. There are people out there who are already doing some of the things that I’ve been talking about.”

Despite some of the challenges NextGen has experienced during its rollout, Shuster remains optimistic for the future of the system.