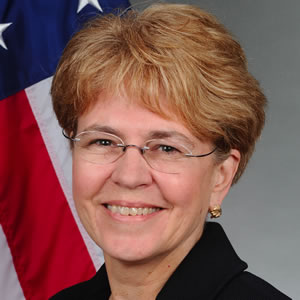 Jane Lubchenco, the first woman to serve as administrator of the National Oceanic and Atmospheric Administration, said Wednesday that she will step down from her post in February.

A successor was not immediately announced.

Lubchenco was appointed the head NOAA in 2009 by President Barack Obama.

Along with being the first woman, she was the first marine ecologist to occupy the post, which had been vacant for 14 years previous to her appointment.

She oversaw the agency through disasters such as the BP oil spill. Her goals included reorienting how the nation responds to environmental issues like rising seas and decreasing fish stocks, to strengthen scientific research and make it more relevant to society, as well as to improve the health of ecosystems and coastal communities.

Dr. Jane Lubchenco has been the under secretary of commerce for oceans and atmosphere and administrator of NOAA since 2009. Nominated by President Obama in December 2008 as part of his “Science Team,” she is a marine ecologist and environmental scientist by training, with expertise in oceans, climate change, and interactions between the environment and human well-being. She received her B.A. in biology from Colorado College, her M.S. in zoology from the University of Washington, and her Ph.D. in ecology from Harvard University. Her academic career as a professor began at Harvard University (1975-1977) and continued at Oregon State University (1977-2009) until her appointment as NOAA administrator.

Under her leadership, NOAA has focused on restoring fisheries to sustainability and profitability, restoring oceans and coasts to a healthy state, ensuring continuity of the nation’s weather and other environmental satellites, developing a Weather-Ready Nation, promoting climate science and delivering quality climate products, strengthening science and ensuring scientific integrity at NOAA, and delivering the highest quality science, services and stewardship possible. Healthy oceans and coasts and a nation prepared for severe weather, disasters and climate change are keys to economic recovery and prosperity.

Lubchenco has served as president for the American Association for Advancement of Science (AAAS), the International Council for Science, and the Ecological Society of America, and was a board member for 10 years on the National Science Board.  She also served on the National Academy of Sciences’ study on “Policy Implications of Global Warming” under the administration of George H.W. Bush. She served on several commissions, including the Pew Oceans Commission, the Joint Oceans Commission Initiative, the Aspen Institute Arctic Commission, and the Council of Advisors for Google Ocean.

Dr. Lubchenco has received numerous awards including a MacArthur “genius” award and 18 honorary doctorates. She was named “2010 Newsmaker of the Year” by the scientific journalNature.Dr. Lubchenco is one of the “most highly cited” ecologists in the world, and eight of her publications are recognized as “Science Citation Classics.” She is an elected member of the National Academy of Sciences; the American Academy of Arts and Sciences; the American Philosophical Society; the Royal Society; and the Academies of Science for the Developing World, for Europe, and for Chile.

Before coming to NOAA, Dr. Lubchenco co-founded three organizations (The Leopold Leadership Program, the Communication Partnership for Science and the Sea [COMPASS], and Climate Central) that aim to communicate scientific knowledge to the public, policy makers, media and industry; she also co-founded a research consortium, PISCO, which studies the near-shore ocean along the coasts of Oregon and California.