It’s one thing to collect a massive amount of data, which the National Oceanic and Atmospheric Administration has been doing for decades. But NOAA’s burgeoning frontier is in harnessing and integrating the right data so companies, governments and the public at large can make intelligent and potentially life-saving decisions related to the weather.

By combining data from adjacent radars, the Multi-Radar Multi-Sensor system gives forecasters a more detailed picture of a thunderstorm’s intensity. The top image is data from a single radar compared with data from the multiple radar system in the bottom image. (Credit: NOAA)

To make those decisions, NOAA recently activated its Multi-Radar Multi-Sensor (MRMS) system, which combines data from nearly 150 radars and numerous satellites stationed on the ground and in the atmosphere to better predict high-impact weather events, like thunderstorms, tornadoes or snow.

Researchers at the Oklahoma-based NSSL designed the system to produce a new high-resolution weather model every two minutes, further strengthening forecasters’ ability to rapidly make decisions. MRMS, which was developed with the help of the University of Oklahoma’s Cooperative Institute for Mesoscale Meteorological Studies, works in concert with a new high-detail atmospheric modeling system NOAA recently unveiled, High-Resolution Rapid Refresh (HRRR). Both programs run out of NOAA’s Center for Weather and Climate Prediction in College Park, Maryland.

“This hasn’t been out there before, this high-resolution, rapidly updating, situationally aware observational material for the forecasters,” said Mark Miller, chief of the Program Management Branch at the National Weather Service’s Office of Science and Technology. “This basically puts it all into the mesh for a AWIPS (Advanced Weather Interactive Processing System) and moves forward, giving the forecasters better situational awareness.”

Improving situational awareness for the sake of forecasts is something that could have a grand impact on the nation’s economy. According to NOAA’s National Climatic Data Center, 170 severe weather events have cost the U.S. over $1 trillion in damages since 1980, $23 billion of that coming just last year.

“Our forecasters do a fantastic job of providing information to the public, and that’s the biggest key,” Miller said. “The issue that faces forecasters is the need for rapidly updating situational awareness information, i.e. observational data, latest radar information, latest satellite information. One of our objectives in the weather-ready nation is to have rapidly updating, three-dimensional environmental knowledge available to the forecasters and the whole entire weather enterprise.” 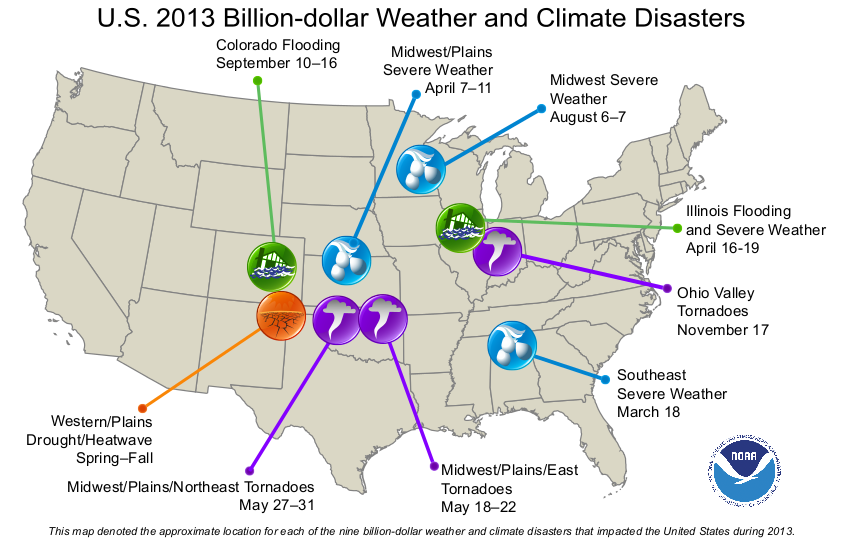 A NOAA map depicts the nine weather events that each cost the U.S. over $1 billion in 2013. (Credit: NOAA)

The program has been in the experimental phase for some time but will now be used to help make decisions on everything from public safety to air traffic control. The program is already being used with the Federal Aviation Administration’s NextGen system to advance controls related to turbulence, icing detection and other quality control measures.

You can learn more about NOAA’s new weather models in the YouTube video below.