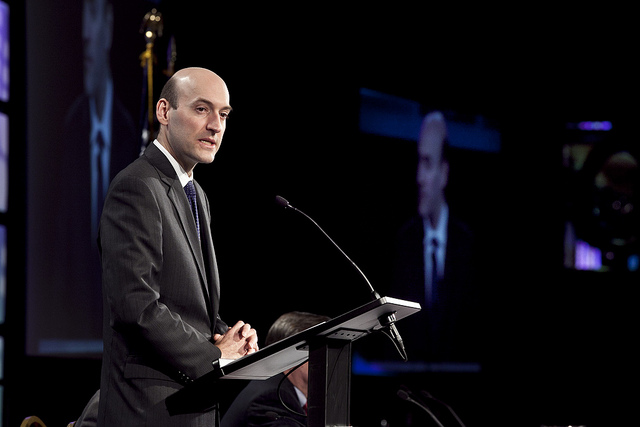 Nuclear Regulatory Commission Chairman Greg Jaczko announced Monday he will step down as head of the agency once a successor is confirmed.

“After an incredibly productive three years as Chairman, I have decided this is the appropriate time to continue my efforts to ensure public safety in a different forum,” he said. “This is the right time to pass along the public safety torch to a new chairman who will keep a strong focus on carrying out the vital mission of the Nuclear Regulatory Commission.”

After nearly eight years on the Commission, I am announcing my resignation as Chairman of the U.S. Nuclear Regulatory Commission, effective upon the confirmation of my successor. My responsibility and commitment to safety will continue to be my paramount priority after I leave the Commission and until my successor is confirmed.

After an incredibly productive three years as Chairman, I have decided this is the appropriate time to continue my efforts to ensure public safety in a different forum. This is the right time to pass along the public safety torch to a new chairman who will keep a strong focus on carrying out the vital mission of the Nuclear Regulatory Commission.

During this last year alone, the agency has responded with an impressive focus on safety under my leadership to a number of diverse challenges including the accident at the Fukushima Da-ichi reactors in Japan, and a number of severe incidents at reactors in the United States ranging from flooding, an earthquake and tornados to damaged plant structures and steam generator problems. In addition to this vigilant oversight, together we identified and began to implement lessons learned from Fukushima and completed our rigorous safety reviews for the first new reactor licenses in 30 years.

Throughout my time on the Commission as both Chairman and Commissioner, the agency finalized regulations to ensure new reactors are designed to withstand an aircraft impact, completed the development and implementation of a safety culture policy statement, enhanced our focus on openness and transparency, and enhanced awareness of and worked to resolve some of the most long-standing generic issues facing the nuclear industry, including sump strainer issues and fire protection. Beyond the power reactor work, substantial progress was made in establishing a more transparent and effective oversight program for fuel cycle facilities. In addition, radioactive sources of concern are now fully protected with our new security regulations and source tracking system. We stand as a stronger and more decisive regulator now because of these years of efforts. I am truly humbled by the agency’s success.

Serving the American people as the Chairman of the U.S. Nuclear Regulatory Commission has been an honor and privilege. The mission of this agency – protecting people and the environment, and providing for the common defense and security – could not be more clear, or more critical. Our collective focus on that mission was, I believe, one of the primary reasons the Nuclear Regulatory Commission was one of the best places to work in the federal government throughout my tenure. The highly talented and dedicated professional staff, including dozens who have served on my personal staff over the years, have been instrumental in fulfilling the agency’s mission.

I will always be grateful for the opportunity of having served alongside the staff for all of these years, and for all that we accomplished together. I am looking forward to bringing all I have learned from my work and focus on safety at this agency with me as I move forward.