Greetings to all my fellow techies. I guess I wasn’t quite as surprised as everyone else when the National Security Agency, which I follow on Twitter, posted an encoded tweet as part of its new Mission Monday effort to recruit smart code breakers and cryptologists. In fact, knowing how much they love codes over there, my first thought was they were sending out encrypted tweets, and those with an aptitude for it would decipher what it all meant. As it turns out, that’s exactly what was happening.

I first discovered NSA’s love for cryptology while working as a reporter. I was assigned to cover the unveiling of a new exhibit at the National Cryptologic Museum, which is run by NSA at Fort Meade in Maryland. It’s a really interesting place that offers a glimpse behind the scenes of one of the world’s most secretive agencies, and I would highly recommend a visit. 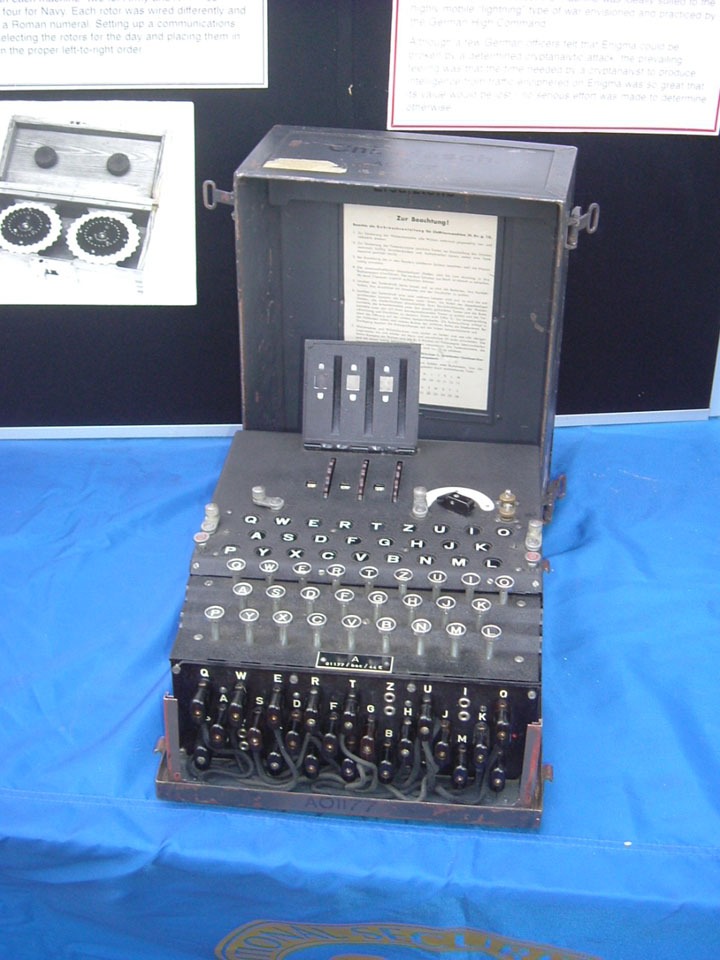 This is the actual working Enigma machine the NSA folks were nice enough to let me play with during World War II days at Eisenhower’s Farm.

Much later on, I encountered NSA and its love of codes again at an unusual place: the Eisenhower National Historic Site in Gettysburg, Pa., at President Eisenhower’s old farmhouse. It was World War II weekend, which is held every September and features historical actors, vehicles and weapons sprawled out into authentic military camps. It’s almost like walking back in time, or at least onto a very realistic movie set.

There, I met author Don Markle and retired NSA employee Rick Henderson. They had a captured German Enigma code machine with them that was actually functional. It had been rigged to run off a car battery instead of whatever the Germans originally used to power it, but otherwise it was in perfect shape.

To my surprise, they actually let me play with it a bit. I typed out several messages and watched as different letters other than what I typed illuminated, encrypted by the cipher rotors on top and the plug connections in the front. Pretending I was Grand Admiral Dönitz ordering the wolf packs to battle was quite an experience.

The Enigma machine, at its core, produced substitution codes, though the cipher rotors meant there was also a code in place. So, for example, the letter A did not always equal the letter B when typing a message. But the encrypted tweet from NSA was less advanced and relied on a simple letter substitution that was consistent throughout the message. So, “NSA” became “FRP,” but all the Ns were always represented by Fs throughout the cipher.

I did notice NSA employed some advanced techniques to try and thwart immediate cracks, notably by grouping the entire message into 12-letter blocks. That prevented anyone from using the known length of common words like “the” or “and” to guess at letters.

This screenshot shows the first encrypted tweet from NSA. Can you crack the code?

They also did a few other things to make it interesting. Code breakers use the frequency of letters to guess at substitutions. The most common letter used in English is E. In the NSA tweet, the most common letter was P, which if you are paying attention, already know was actually an A.

However, using the common letter technique, it was possible to find out that T, the second most common letter in English, was represented by C in the puzzle. And O, the fourth most common letter, was actually a D. That was helpful in pulling the word “to” out of the first sentence. From there, I guessed the question mark was actually itself, and that there was a good chance the letters “NSA” would end that sequence. The code fell pretty quickly from there.

I was a little disappointed in the message itself, which read “Want to know what it takes to work at NSA? Check back each Monday in May as we explore careers essential to protecting our nation.” I sort of felt a bit like Ralphie being told to drink more Ovaltine.

Hopefully, future Monday ciphers will use more advanced techniques, as I’m looking forward to the challenge. Otherwise, a number of brute force cracking sites like QuipQuip can easily be employed for those who don’t like working on puzzles. And I’m pretty sure NSA is looking for actual code breakers, not just people who have mastered the art of “Google-fu.”

by Dave Nyczepir • 20 hours ago
Modernization