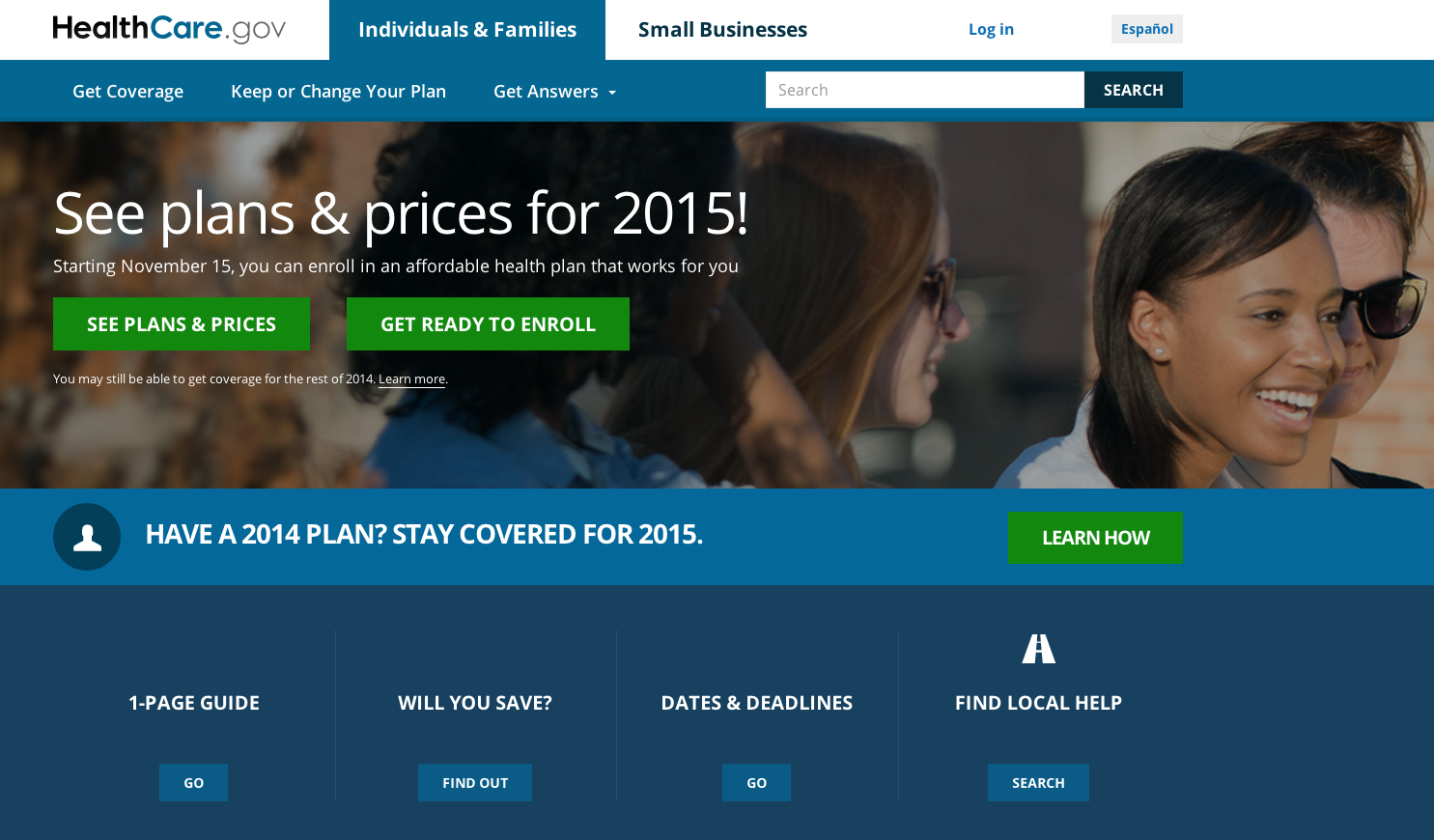 Come Nov. 15, all eyes will return to Healthcare.gov with memories of last year’s flawed technological launch top of mind as the Affordable Care Act’s second enrollment period begins. But this time, President Barack Obama and his Healthcare.gov team are confident that things will be different.

Despite 8 million Americans selecting an Affordable Care Act insurance plan by the time Open Enrollment 2014 ended, the first go around of Obamacare was decried a failure, the target of constant media and lawmaker scrutiny. This time, the Obama administration will arguably have even more at stake, attempting to prove it can make good on its promise to provide a stable digital health exchange for affordable health insurance.

Speaking after midterm elections when Republicans regained Congress, Obama said the Americans who “sat on the sidelines, in part because of our screw-ups on Healthcare.gov” will get the opportunity to partake in a working system come Saturday.

“We’re really making sure that that website works super well before the next open enrollment period. We’re double- and triple-checking it,” Obama said. “And so. I think a lot of people who maybe initially thought, ‘we’re not sure how this works, let’s wait and see,’ they’re gonna have an opportunity now to sign up.”

The Affordable Care Act is a much bigger beast than the technology needed to support the federal insurance marketplace, but most key officials responsible for its implementation realize IT is vital to its success. Andy Slavitt, who joined the Centers for Medicare & Medicaid Services as principal deputy administrator after helping lead the charge to fix last year’s flawed Healthcare.gov site, is using the lessons learned from early failures to make critical changes to the website in hopes prior users will return.

“We have been working in a number of areas to raise the bar,” Slavitt said in a conference call to reporters Sunday. “Our principal focus is to bring people back to the website so they can update their information and shop for the best values. That’s our principal focus — to get people to come back.”

Department of Health and Human Services Secretary Sylvia Burwell told an audience Monday during a discussion with the liberal think tank Center for American Progress that the consumer will have a better interaction and things will be “simpler, faster and more intuitive.”

That means updates to the site to make the user experience better. In October, officials showed a live demo of how the new Healthcare.gov will work. Aesthetically, it looks different. But more importantly, the application is much shorter, condensed from 76 screens of individual questions to just 16 with sets of questions on each page to cut down on load numbers, what the Healthcare.gov team refers to as Application 2.0.

Those who took part in Healthcare.gov’s Special Enrollment Period, which extended beyond the March 31 deadline earlier this year, were test dummies of sorts for the updates, allowing Burwell and her teams with HHS and CMS to live test the application and “see if it was working, make corrections to it,” she said.

Past and potential users may also find the site more inviting. Enrollees from last fall’s sign up will not face the tedious task of re-entering information from last year. And for those on the go, the website will be more mobile friendly.

One of the biggest updates, a window-shopping tool, was launched by CMS earlier this week. A major criticism of the first open enrollment period was the requirement to sign up to browse health insurance plans on the marketplace. But now, even before Healthcare.gov opens Saturday, users can already do just that.

“Consumers can prepare for open enrollment by visiting HealthCare.gov and using the window shopping feature to see what plans will be available in their area,” CMS Administrator Marilyn Tavenner said in a statement. “Using this tool, consumers can compare plans, covered benefits, and physician and hospital networks before the Marketplace annual open enrollment period starts on November 15. New features will give consumers a comprehensive picture of the plans in their area so they can choose the one that’s right for them.”

And because window shopping is the most popular use of Healthcare.gov — CMS cites it having three times the traffic of any other page on the website — this early open period should take away from some of the first-day rush. Last year, 13.5 million — nearly twice as many who actually became insured — logged on to Healthcare.gov, likely to check out prices. CMS also said it has “improved the scalability and performance of the tool for high volumes of traffic” and made it mobile ready.

That kind of load balancing will be key to keeping Healthcare.gov up and running smoothly. With this open enrollment shorter than last year’s, the worry is that again more people than expected will flood to the site, rendering it unusable.

Burwell, though, has faith in the IT.

“As I’ve said several times, we are confident that we are going to have a successful enrollment,” Burwell said. Talking about the website, she said the administration has been “spending a tremendous amount of time to do some things differently. Last year, our testing was 10 days, this year our testing is five weeks.”

In addition to testing with insurers and issuers, she said they’ve worked with load testing and end-to-end testing, as well as security. This year’s enrollment reportedly can handle 250,000 users at a time, twice the amount of last year’s peak of 125,000 the day open enrollment closed. Hosting the website will be split across three different vendors, including Terremark, an IT subsidiary of Verizon Communications Inc. that took part in last year’s enrollment period; Hewlett-Packard Co., awarded a contract to take over as the main cloud service provider next year; and Amazon Web Services, which will support new users on Healthcare.gov’s Marketplace 2.0.

“We’ve made sure we’re bringing the best practices from the [public] sector, and whether that means bringing our colleagues at [the Department of Homeland Security] in or the FBI in, to the best practices in the private sector, which include things like we actually scan everyday; in addition we have people who actually try and hack us.”

“We’ve hit all of the critical deadlines we set over the summer for testing,” Slavitt said.

Of course, testing doesn’t make Healthcare.gov, or any IT system, immune to hiccups or glitches. And despite their optimism, Healthcare.gov officials are preparing themselves for a few bumps along the way.

“I expect that it won’t be perfect,” Slavitt in a July testimony before the House Committee on Energy and Commerce. “There will be bumps.”

Last year when turbulent times hit, Obama had to recruit a squad of Silicon Valley experts to pick up the pieces. But with the creation of the U.S. Digital Service in August, if crisis hits, there will already be a team in place to respond; even better, it’s lead by the experienced Mikey Dickerson, one of the key contractors brought during the botched rollout last fall. USDS is also helping out prior to launch to make sure things go smoothly, too.

“Our team has helped to identify areas where we can reduce complex or redundant citizen-facing features of the platform, like reducing the number of clicks and eliminating repetition of required information fields,” USDS’ Haley Van Dyck said. “As we do with other agencies, we work under the leadership of agency teams and in conjunction with staff. Ultimately, the goal is to ensure the right technology is in place so that the public has a simple, easy experience when shopping for affordable health care.”

Whether Healthcare.gov 2.0 is an improvement or not, its purpose — and that of the greater ACA — is to make affordable health care an easier option for Americans and effectively reduce the number of uninsured Americans, which has dropped by 26 percent in the last year. And while 7.1 million American became insured during the first enrollment period, the Congressional Budget Office expects that by 2015, 13 million people will have purchased their insurance through the website.