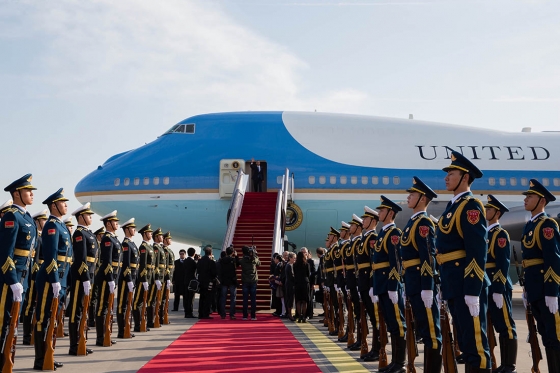 President Barack Obama arrived in Beijing earlier this week to address the APEC summit where the U.S. and China agreed on stipulations that would update the information technology agreement at the World Trade Organization. (Chuck Kennedy/White House)

The United States and China have struck a deal to update and expand the 1997 Information Technology Agreement through the World Trade Organization, the White House announced late Monday. The move expands the agreement to include technologies that didn’t exist when the ITA was first signed and eliminates tariffs on high-tech goods.

“The last time the WTO agreed to eliminate tariffs on IT products was in 1996 when most of the GPS technology, much of the medical equipment software, high-tech gadgetry that we rely on in our daily lives didn’t even exist,” U.S. Trade Representative Mike Froman said during a press briefing in Beijing Tuesday. “In fact, since that time, global trade in these types of high-tech products have reached $4 trillion annually.”

The new agreement, if agreed to by all parties, would eliminate tariffs on about $1 trillion of global IT product sales and would contribute $190 billion to the global gross domestic product. According to Froman, the agreement could result in 60,000 more jobs in the U.S. in the technology and manufacturing sector.

Roberto Azevedo, the director-general of the World Trade Organization, hailed the two nation’s progress on a new agreement and said it signified a large step toward a new agreement.

“I hope it will create renewed momentum, enabling negotiations to be concluded as quickly as possible,” Azevedo said. “Agreement on expanding the ITA would be the first successful tariff-cutting negotiation in the WTO for over a decade and a half — and, crucially, would benefit all WTO members, not just the ITA participants, because the tariff cuts would be applied in a non-discriminatory manner.”

Currently, tariffs on newer products that are not covered by the ITA can range as high as 25 or 30 percent. With the reductions in tariffs resulting from the agreement, consumers will have more access to products, and producers will be able to sell more of their product, Froman said.

“Right now, the trade in these cover lines is about $1 trillion, and we’d expect it to grow significantly for the benefit of consumers and the benefits of producers, including a lot of products made in the United States,” Froman said. “We export over a billion dollars of these products right now, even with these barriers in place, and that will help support more jobs in the United States.”

Now, the breakthrough on the agreement between the United States and China will go to Geneva, and negotiations on the update to the ITA will resume.

“We’re hopeful that we’ll be able to work quickly to bring ITA to a successful conclusion, and that will help support good-paying jobs in the United States, where we lead the world in creating and selling made-in-America high-tech products that the world is hungry to buy,” Froman said.

In 2013, talks about the expansion of the original 1997 agreement broke down due to the scope of the coverage and which products it would cover, Froman said.

“Since that time, the United States and China have been working to close our differences but without a breakthrough sufficient to resume the plurilateral negotiations in Geneva,” Froman said. “That finally changed here last night with an agreement between the U.S. and China that we expect will pave the way of the resumption of ITA negotiations in Geneva and their swift conclusion.”

Once signed, the agreement will be the first major tariff-cutting agreement in the WTO in almost two decades, Froman said.

President Barack Obama announced that the two countries had reached an agreement during remarks at the first session of this week’s Asia-Pacific Economic Cooperation, or APEC, summit in Beijing. During the remarks, he said APEC had been an incubator in the original ITA and continued to be so almost two decades later.

“This is where the trade facilitation agreement started,” Obama said. “It was APEC’s work that led to the Information Technology Agreement, the ITA, which we are now negotiating to expand.  So it’s fitting that we’re here with our APEC colleagues to share the news that the United States and China have reached an understanding on the ITA that we hope will contribute to a rapid conclusion of the broader negotiations in Geneva. We think that’s good news.”