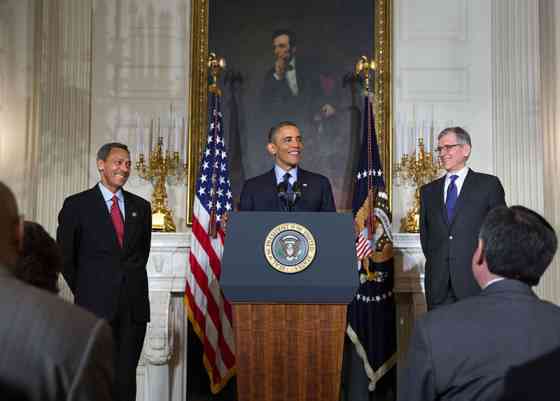 In the State Dining Room of the White House on Wednesday, President Barack Obama announced his intent to nominate Rep. Melvin Watt (D-N.C.) and Tom Wheeler as director of the Federal Housing Finance Authority and chairman of the Federal Communications Commission, respectively.

Obama spoke highly of the two men, saying they are “individuals who are going to help us grow our economy, but are also going to be looking out for the middle class.”

Despite recent improvements in the housing market, the president said at the May 1 announcement there is much work left to be done. During his 20 years on the congressional committee overseeing housing policy, Watt “led efforts to rein in unscrupulous mortgage lenders … helped protect consumers from the kind of reckless risk-taking that led to the financial crisis in the first place. And he’s fought to give more Americans in low-income neighborhoods access to affordable housing,” Obama said.

The president commended FCC chair nominee Wheeler for creating thousands of high-tech jobs, noting his experience leading the group in charge of advising FCC on the latest technology issues.

Wheeler will play an important role as FCC chair, “giving businesses and workers the tools they need to compete in the 21st-century economy, and making sure we’re staying at the cutting edge of an industry that again and again we’ve revolutionized here in America,” Obama said.

“We look forward to working with him on the many public policy issues facing today’s communications companies and their customers, including the deployment of broadband services to high-cost areas, the elimination of unnecessary rules and regulations, and the creation of real competition for video services,” Newman said.