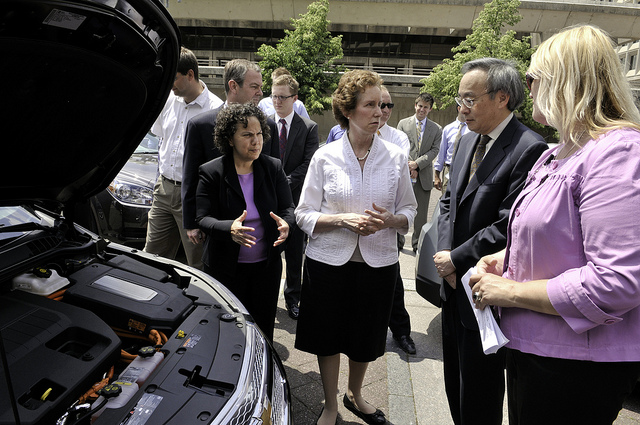 President Obama released a memo Tuesday calling for all federal light-vehicle purchases and leases to be either hybrid or alternative-fuel vehicles by 2015 to aid agencies in reducing oil consumption by a third over the next decade.

The memo also called for agencies to develop and implement a methodology to determine their agency’s optimal fleet size a plan to achieve this target by 2015 as well.

“We owe a responsibility to American citizens to lead by example and contribute to meeting our national goals of reducing oil imports by one-third by 2025 and putting one million advanced vehicles on the road by 2015,” the memo said.

It continued, “Living up to that responsibility means the Federal fleet should operate only as many vehicles as needed to work efficiently, leveraging Federal purchasing dollars to build manufacturing capacity for more alternative fueled vehicles, and reducing petroleum consumption through efficiency and alternative fuels.”

In conjunction with the memo, the General Services Administration launched a pilot project to incorporate electric vehicles and technologies into the federal fleet.

GSA announced its initial purchase of more than 100 electric vehicles for a vehicle pilot. These vehicles will be leased to 20 agencies, including the Department of Energy, and will be located in Washington, Detroit, Los Angeles, San Diego and San Francisco. As manager of Federal fleets and buildings, GSA will also coordinate with these agencies to establish necessary infrastructure for fueling and recharging at Federal building locations receiving the first round of vehicles.

“As the nation’s largest vehicle fleet operator, the President’s fleet management directives and GSA’s electric vehicle pilot will cut the Federal fleet’s petroleum use and support the development of domestic, clean energy technologies – supporting the President’s goal of cutting imports by a third by 2025 and continuing to build a 21st century clean energy economy, while also saving taxpayer dollars,” said Nancy Sutley, Chair of the White House Council on Environmental Quality.