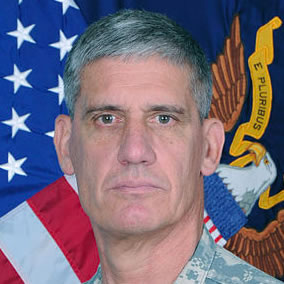 U.S. Africa Command is the newest combatant command with headquarters in Stuttgart, Germany. The command encompasses all of Africa and its adjacent waters except for Egypt.

The Senate must confirm Rodriguez, who currently is commander of U.S. Army Forces Command at Fort Bragg, N.C.

“He has served in a variety of key leadership roles on the battlefield,” Panetta said in announcing the nomination.

Rodriguez was the first commander of the International Security Assistance Force Joint Command, the corps-level command in Afghanistan. He was the commander during the surge into Afghanistan, “and was a key architect of the successful campaign plan that we are now implementing,” Panetta said.

Panetta also announced the nomination of Lt. Gen. John M. Paxton, Jr. to receive his fourth star and serve as the next assistant commandant of the Marine Corps. He would succeed Gen. Joseph F. Dunford, Jr., whom the president has nominated to command coalition and U.S. troops in Afghanistan. Paxton is commander of Marine Corps Forces Command, Marine Fleet Force Atlantic and U.S. Marine Corps Forces Europe. Paxton and Dunford also must be confirmed for their jobs by the Senate.