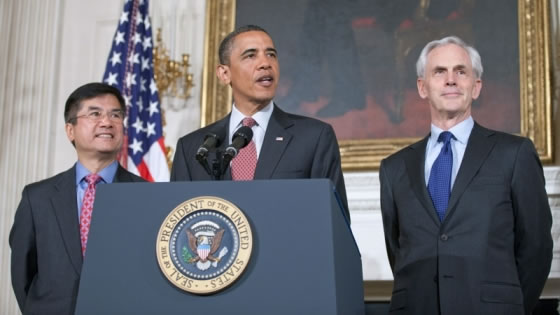 President Obama nominated former Edison International CEO John Bryson on Tuesday to be the next Secretary at the Department of Commerce, replacing Gary Locke who will become the nation’s Chinese Ambassador.

“As Commerce Secretary, John is going to be an important part of my economic team, promoting American business and American products across the globe,” Obama said. “By working with companies here at home, and representing America’s interests abroad, I’m confident that he’s going to help us meet the goal that I set of doubling our nation’s exports.”

Bryson left Edison International in 2008 and has since served as a director at Boeing, Disney and Coda Automotive and is chairman of the board of BrightSource Energy, the Public Policy Institute of California (PPIC). He is also on the Board of Overseers at the Keck School of Medicine at USC.

“In this new role, John will be able to draw on decades of business experience across a range of industries -– from his role on the boards of major companies like Disney and Boeing, to his leadership in the clean energy industry,” Obama said. “That’s the expertise that will help us create new jobs and make America more competitive in the global economy.”

He continued, “Of course, John will be building on the success of outgoing Commerce Secretary Gary Locke, who has tirelessly advanced America’s economic leadership abroad, securing export deals that will mean hundreds of thousands of jobs here in America -– including an agreement with China, where Gary will now be serving as our next ambassador. And we couldn’t be prouder of him and we’re confident he is going to be doing an outstanding job there.

The U.S. Chamber of Commerce said in a statement: “With his extensive knowledge of the private sector and years of experience successfully running a major company, we hope Mr. Bryson will be a strong voice for American businesses.”