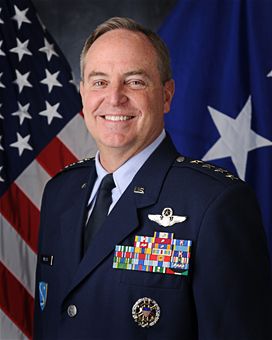 Defense Secretary Leon Panetta announced that President Obama has nominated Gen. Mark A. Welsh III to be the next chief of staff of the Air Force, succeeding Gen. Norton Schwartz, who has served in the position since August 2008.

“I’m tremendously honored and deeply humbled by the nomination to serve as the next Air Force chief of staff,” said Welsh, who currently serves as the U.S. Air Forces in Europe commander. “If confirmed, I’ll do everything in my power to live up to the example set by Gen. Norty Schwartz and the other great officers who have led our service so well throughout its remarkable history.

“It’s always a great day to be an Airman … but this one is extra special for me. I came into the Air Force because I was in love with the airplanes; I stayed in because I fell in love with the people,” he said. “Being allowed to continue to serve them, our Joint partners, and the nation in this role would be the privilege of a lifetime.”

Welsh entered the Air Force in June 1976 as a graduate of the U.S. Air Force Academy. He has been assigned to numerous operational, command and staff positions. Prior to his current position, he was associate director of the Central Intelligence Agency for Military Affairs in Washington, D.C.