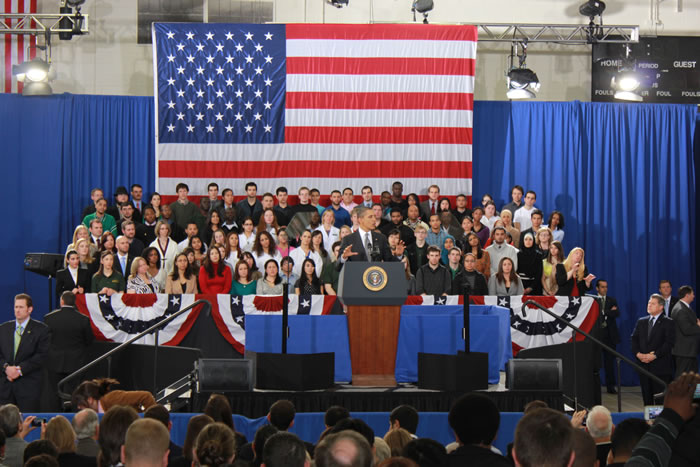 President Obama sent Congress a new budget on Monday that projects a $1.33 trillion deficit, but with an outline to achieve $4 trillion in deficit reduction over the next decade while also pushing billions of dollars toward areas aimed at boosting the economy in the near term.

“Today, we are seeing signs that our economy is on the mend,” Obama said in the budget. “But we are not out of the woods yet. Instead, we are facing a make-or-break moment for the middle class, and for all those who are fighting to get there. What is at stake is whether or not this will be a country where working people can earn enough to raise a family, build modest savings, own a home, and secure their retirement. This is the defining issue of our time.”

He continued, “This Budget reflects my deep belief that we must rise to meet this moment—both for our economy and for the millions of Americans who have worked so hard to get ahead.”

Obama discussed the budget Monday morning at an event at the Northern Virginia Community College Campus in Annandale, Va., where he highlighted an $8 billion proposal that aims to boost the ability of the country’s community colleges to train students for future jobs.

One of the tenants of that proposal is finding ways to help fund education for people like Mike Phillips, who introduced the president to the crowd. Phillips, an NVCC graduate, left a career as a real estate broker during the housing crisis to get a degree in cybersecurity, a sector with nearly zero unemployment.

To spur job creation in the short-term, Obama is proposing a $50 billion “upfront” investment for transportation, $30 billion to modernize at least 35,000 schools and $30 billion to help states hire teachers and police, rescue and fire department workers.

The budget, though, does not come without some tough choices, Obama said.

For instance, six cabinet level departments will see their budget allocations drop for the upcoming fiscal year, including the Departments of Agriculture, Justice, Homeland Security and Defense.

In the case of taxes, the budget never spells out Obama’s much-talked-about “Buffett rule”—-that all of the most wealthy must pay an effective tax rate of at least 30 percent.

For middle and lower income families Obama would extend the Bush-era tax cuts due to expire next year. But his budget does not call for a further extension of the payroll tax holiday that he is still battling with Republicans over this month.

“It’s time for everyone to pay their fair share,” Obama said.