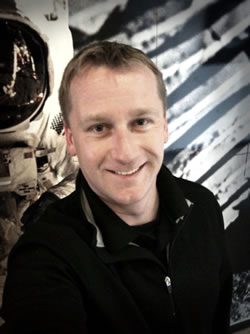 Skytland also plays a key role in implementing NASA’s ongoing open government efforts (he’ll speak at FedScoop’s Citizen Engagement & OpenGov Summit tomorrow). We asked him a few questions about his work and lessons-learned for other agencies.

What NASA programs are specifically focused on open government?

The aim of the NASA Open Government Plan is to make the principles of OpenGov a part of NASA’s everyday culture, rather than the territory of certain projects. The goals are to increase agency transparency and accountability to external stakeholders, enable citizen participation in the NASA’s mission, improve internal NASA collaboration and innovation, and encourage partnerships capable of creating economic opportunity. We see this as a responsibility of everyone who works at NASA. The Open Government Initiative can help us all better establish our science and research priorities, select missions, conduct research, develop technology and make discoveries.

An upcoming Open Government event that we are very excited about is Random Hacks of Kindness (RHoK), which takes place on June 4-5, 2011. RHoK is a unique collaboration between Google, Microsoft, Yahoo!, NASA and the World Bank dedicated to using technology to make the world a better place by building a volunteer community of innovation. We are organizing a weekend long marathon hacking event with multiple global locations in order to bring together developers from all over the world to hack on real-world problems. This is our 3rd RHoK event, and we are excited to support an ever-growing global developer community who work hand in hand with experts in disaster risk management to identify critical global challenges, and develop software to respond to them.

How is NASA leveraging technology to be more open?

Technology really opens the door for citizen engagement at a new level. For example, we are experimenting with a number of open innovation platforms that allow citizens to engage in critical discussions for the agency through, particularly through virtual participation. The NASA Centennial Challenges and the InnoCentive Pavilion are great examples of leveraging technology to encourage the two-way conversation and engage citizens in solving tough challenges. Social media has also been a vital element to communicate NASA’s story and formulate answers and ideas out into the public space.

Our biggest challenge is to embrace the disruptive innovation that comes with new technology in order to improve the way we do business, the way we communicate, and the way we collaborate. When it comes to leveraging technology, we choose to spend our limited time and resources experimenting with new capabilities that result in disruptive innovation for the agency, rather then focus on sustaining innovation with existing technology. NASA’s internal cloud computing platform – Nebula – is one of our flagship initiatives for the Open Government team and is a good example of how we are embracing disruptive innovation in terms of technology at NASA. Nebula is enabling a completely scalable Infrastructure as a Service built especially for NASA’s needs. The agency is committing to evaluating “open source first” to accelerate the software development process, saving time and money and increasing interoperability.

What lessons have you learned around opening NASA?

Our open government framework really strives to adapt to a changing external environment, engage with citizens, and improve our agency through collaborations and partnerships. The underlying motivation behind the Open Government Initiative marks a shift in the way we do business and we have learned so much in the first year of implementing our Open Government Plan. We have a number of lessons learned to share, two of which I’ll discuss today.

First, we have learned that there is a huge demand by citizens to participate in NASA’s mission as well as a large interest by our own scientists, engineers and other professionals to utilize new engagement platforms to solve complex problems. There are well over 500,000 people around the globe who are already contributing their time, money, and resources to work in the field and hundreds of thousands, if not millions more, who are looking for additional opportunities to participate in challenging and meaningful projects.

Taking advantage of the many possibilities created by a networked, digital world and tapping into this community of passionate citizen scientists is a a major opportunity for NASA. The more our own scientists and engineers use the citizen engagement platforms, the more we learn how to better engage the public (and our own employees) in our mission. Well before the OpenGov Initiative was introduced, NASA was already engaged in prize competitions to accelerate innovation for mission-relevant technologies, but we’ve seen an increase in interest in unlocking the the power of community-based collaboration and open innovation platforms over the past year to tackle hardware and software development and scientific research.

Many have seen this as a opportunity to gather and analyze information in new ways or unlock solutions to complex problems using new approaches that we may have not been able to do before.

The second lesson learned is a better understanding of the relationship between technology innovation and changes to our internal policies, procedures and processes that govern the way we do our work. Although their are many examples of how Open Government applies has identified areas to improve the way we work and thereby increase technological innovation, I’ll point to the use of Open Source Software development as a specific example.

NASA has been utilizing and developing open source software for quite some time and doing so has already provided numerous benefits to NASA. However, we recognize that the full benefits of open source can only be achieved if NASA is able to establish the processes, policies, and culture needed to encourage and support open source development. Because open source is an inherently transparent, participatory, and collaborative approach that is revolutionizing the way software is created, improved, and used, it fits well within the mandate of the NASA Open Government Initiative. We know that the full potential of open source software development will require identifying new ways for NASA to expand its open source activities beyond just releasing software only when its completed.

We held our first Open Source Summit in March 2011 as a way to bring leaders in the open source community to discuss the challenges with the existing open source policy framework, and propose modifications that would make it easier for NASA to develop, release, and use open source software. There was a lot of interest – although the event was originally planned to be a small discussion amongst 60 industry leaders, over 700 people participated in the event, 545 of them who participated online.

The event brought together engineers and policy makers across NASA and respected members of the open source community to discuss the challenges with the existing open source policy framework, and propose modifications that would make it easier for NASA to develop, release, and use open source software. We used the opportunity to learn from the leaders in the open source community. More than 47 topics were suggested for discussion with more than 638 votes cast. The topmost challenges were discussed and debated in further detail, producing more than 17 major issues with 66 substantive solutions.

It’s clear that our internal policies, procedures and processes do not necessarily reflect the best practices of the open source community and therefore do not encourage the internal development and release of open source software. Moving forward, we hope to publicly release the proceedings from the summit and work to update our policies, procedures and processes at NASA – based on the feedback from this summit – to better embrace Open Source development and accelerate technological innovation at the agency.