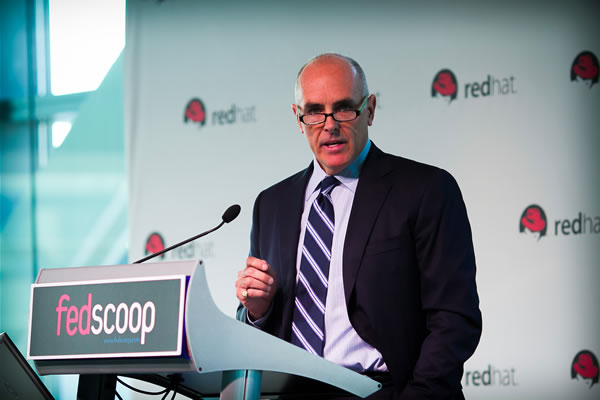 Smith’s comments came Tuesday as a kickoff to the Red Hat Government Symposium, produced by FedScoop, at the Newseum where more than 600 attendees convened to discuss lessons learned from implementing open source solutions in an event that featured nearly 40 speakers and panelists.

“If there’s one lesson that has become clear, it’s that mission-critical IT demands at all levels of the government require freedom and choice,” Smith said. “The high costs, high risk and elusive returns of proprietary software just don’t make sense for the government’s biggest IT challenges.”

“We are literally out-manned and out-gunned,” Meyerriecks said. “We can attract smart people, but it’s not enough. The truth is, bright ideas don’t come just from your community, but from creating ways that others can get involved and lend their expertise to your problems and think about them in new ways.”

Meyerriecks said that because of the intelligence community’s unique mission and different levels of secure information that it must, by nature, be secretive much of the time as lives are at stake. However, the community has opportunities in areas like business and competitive intelligence that can be better leveraged through a large community.

“We have to be secretive, but we don’t have to be mysterious,” she said.

Dan Risacher, associate director for Information Enterprise Strategy and Police in the office of the Department of Defense chief information officer, referenced Sun Tzu and The Art of War as it relates to open source. Sun Tzu said agility wins and wars and, in the case of federal technology, open source enhances agility.

Risacher added that open source provides the ability for peer review that was previously unavailable and that open source can adapt to missions much faster than proprietary software which updates on the vendor’s schedule – not DOD’s.

Chris Willey, CIO of the Consumer Financial Protection Bureau, issued a challenge to all federal agencies, asking them to make use of and contribute to the CFPB’s code. He added that the CFPB is applying open source methodology to the rule-making process of the new agency.

“The reality is that the DOD and .mil space is about 10 years ahead of the .gov community when it comes to open source technologies and adoption,” he said.

He added that government needs to be in the open source community and should not be any different than any other contributor or user. To that extent, he said DHS is looking at funding open source projects through its R&D arm, like Suricata.

Securities Exchange Commission CIO Tom Bayer said the SEC has more than 50 applications in the cloud. The elastic storage and bandwidth allowed by cloud has been beneficial in dealing with major online inquiries of the agency as was the case with the Facebook initial public offering.

U.S. Patent and Trademark Office CIO John Owens said he leans toward agile development as he doesn’t have time for lengthy and arduous processes.

“It’s not about ‘the cloud,’” Owens said, “it’s about finding the right cloud environment for the job.”