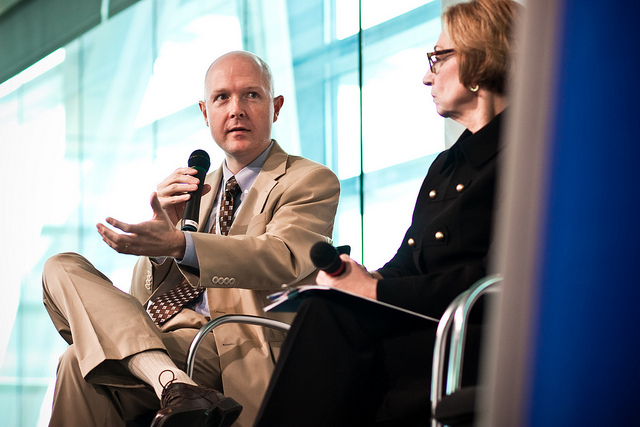 So what exactly is telework? And we’re not asking if it means working from home a couple of days per week?

No, the question is what is telework in the eyes of federal employees? Is it a new and better way to get work done or a simple perk to keep employees happy?

Office of Personnel Management Deputy Director Justin Johnson said yesterday at FedScoop’s 3rd Annual Lowering the Cost of Government with IT Summit at the Newseum that this debate is raging throughout government agencies these days and its affecting how the 2010 Telework Act is being implemented.

“There is a lot of money being thrown at the technology behind telework so I have no doubt that aspect will be reached,” Johnson said speaking on a panel with Intel Director of Federal Marketing Nigel Ballard and U.S. Patent and Trademark Office Telework Senior Advisor Danette Campbell, “but the other part of this is the culture around telework and that’s what will cause this initiative to rise and fall.”

Johnson said that Campbell’s programs at USPTO are an example of the benefits of telework. She instituted a program that where 3,300 employees are currently hoteling and have voluntarily given up their office space at agency headquarters to telework from home four or five days per week.

“By allowing them to hotel and not commute into the region as frequently, we’ve made a positive impact on emission reduction in the region. The USPTO Hoteling Program has enabled the agency to hire new employees without securing additional real estate. This program also positions the USPTO as an employer of choice,” she said.

On the other hand, he said, there are other agencies who are just launching telework programs – literally from the ground up – and haven’t given the initiative the same kind of push.

“Each agency has a telework managing officer and if you see the kind of authority that person has been given you can get a good idea of where the agency’s telework priorities lie,” Johnson said.