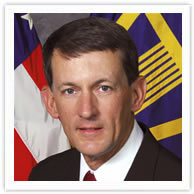 Mark Orndorff has been named the chief information assurance executive at the Defense Information Systems Agency, adding to his duties along with his current role as program executive officer for mission assurance and network operations, the Department of Defense announced Monday.

Prior to this role, Mr. Orndorff served as the Chief of DISA’s Field Security Operations organization. As such, he served as the single IA certification authority within DISA, supporting accreditation decisions for all DISA systems and networks. He was also responsible for the execution of significant portions of DISA’s IA program including implementation and management of DoD Enterprise Solutions; development and maintenance of Security Technical Implementation Guides, checklists, and evaluation scripts supporting the Department of Defense; development and maintenance of DoD’s NetOps and IA training program; and development of a NetOps and Computer Network Defense Service Provider (CNDSP) certification program. Mr. Orndorff was also responsible for DISA’s Information Assurance support to the Unified Commands and management of the regional Net Defense contract.

Prior assignments included service as the operations manager within the DISA Network Operations Center, Fort Ritchie, Md., where he provided remote network and systems management support for Army units worldwide. Mr. Orndorff was also a Network Engineer for the U.S. Army Training and Doctrine Command (TRADOC) and a Project Manager for the Army’s Program Manager for Tactical Management Information Systems. In addition to the above, Mr. Orndorff has held a variety of other management positions. Responsibilities have included: management of programs and the development of technology and standards for a TRADOC wide area network; and management of the Army’s Tactical Army Combat Support System (CSS) Computing System. Prior to joining the civil service, Mr. Orndorff served as an Army officer with assignments as a Company Commander and Platoon Leader.

Mr. Orndorff attended the University of Virginia, where he received a Bachelor of Arts Degree with High Distinction in Environmental Science. He also received a Master of Science Degree in Computer Systems as a Distinguished Graduate from the Air Force Institute of Technology. Mr. Orndorff was born in Arlington, Va., and is married to Susan, has a son in the Air Force serving in San Antonio, Texas, and a daughter working for Marriott Corp. in San Francisco, Ca. He lives in Fayetteville, Pa., and enjoys golf, cycling, and running.